New figures from the Central Statistics Office show that employment rose by 3.1% in the fourth quarter of last year compared to the same time in 2016.

The CSO's Labour Force Survey reveals that a total of 2,231,000 people were employed in the three months from October to December.

That is just 12,000 below the all time peak of employment ever recorded in the State, while it also marked an increase of 66,800 on the same quarter in 2016.

The employment rate rose to 68.3% in the three month period, up from 67.1% to the corresponding time a year a earlier and the highest employment level since the second quarter of 2008.

The country has now seen an upward trend in employment for the last 22 quarters.

The CSO noted an increase in full time employment of 5.4% - a trend which started in the first quarter of 2013, while part-time employment fell by 4.8% as it continued its path downwards.

The CSO noted that long term unemployment accounted for 40.3% of total unemployment in the three month period.

Employment rose in 12 of the 14 economic sectors on an annual basis in the final quarter of 2017.

The greatest rates of increase were posted in the sdministrative and support services activities, which saw employment up 11.6%, while the numbers of people working in construction rose by 9.9%.

Meanwhile, the biggest job losses were seen in professional, scientific and technical activities, which fell by 4.1%. 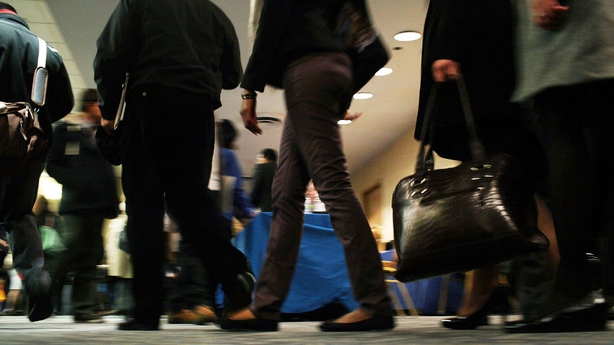 Comparing Ireland with the rest of Europe, the CSO said that Irish employment increased by 0.8 percentage points to 68% over the year to the third quarter of 2017, while the employment rate in the EU-28 in Q3 2017 was 68.2%.

The unadjusted unemployment rate among the EU-28 countries in the third quarter of 2017 was 7.3%, while the comparable rate in Ireland was 6.9%.

It noted that the highest unemployment rates among the EU-28 countries in the third quarter of last year were recorded in Greece and Spain - at 20.3% and 16.4% respectively.

The lowest rates of 2.8% and 3.6% were recorded in the Czech Republic and Germany respectively.

He said that although emigration has been a factor to some degree in keeping unemployment down since the financial crisis, the labour market has improved dramatically over the past few years, reflecting the strengthening of the economic recovery.

"As regards 2018, another positive year for the labour market is envisaged, though the net jobs gain is forecast to be lower than last year, at around 50,000," he added.

The Labour Force Survey has replaced the CSO's Quarterly National Household Survey and it is the official source of data for employment and unemployment in Ireland.

The new survey has seen the introduction of computer assisted telephone interviewing, a redesigned questionnaire and enhancements to the survey methodology.