The ECB said this entire sum will be distributed among the 19 national central banks in the euro zone.

The bank said the increase in profits was mainly a result of higher net interest income earned on its US dollar portfolio and securities in its €2.55 trillion asset purchase programme.

Meanwhile, ECB policymakers meeting last month felt it was too early to change their communication stance to signal a normalisation of policy.

This was despite the fact confidence was growing that inflation would finally rise back to target, minutes from the meeting showed.

Discussion over tweaking the bank's stance could still start early this year but policymakers concluded the bank needed to avoid abrupt adjustments and to keep a close eye on the euro's firming, according to the minutes published today.

The ECB left policy on hold at the January 25 meeting and warned that attempts by US officials to talk down the dollar could force it to rethink policy as a decades-old pact not to target currencies appeared in danger.

"Changes in communication were generally seen to be premature at this juncture," policymakers said.

"Monetary policy would continue to develop... with a view to avoiding abrupt or disorderly adjustments at a later stage," they added.

The comments suggest that policymakers will move by increments, keeping one eye on markets to avoid having to backtrack.

"There was broad agreement among members that the recent volatility in the exchange rate of the euro was a source of uncertainty which required monitoring," the minutes added.

Investors expect the ECB to wind down its €2.55 trillion bond purchase scheme by the end of the year, satisfied that inflation is finally moving higher, even if it could still undershoot the bank's near 2% target for years to come.

But policymakers are especially sensitive to the euro's moves as any big rise in the currency could cut into inflation, threatening to reverse the impact of the very stimulus the bank has been providing over the past three years.

"The language pertaining to the monetary policy stance could be revisited early this year as part of the regular assessment at the forthcoming policy meetings," the ECB said.

"While there was reason to be increasingly confident about the path of inflation, patience and persistence with regard to monetary policy were still warranted," it added. 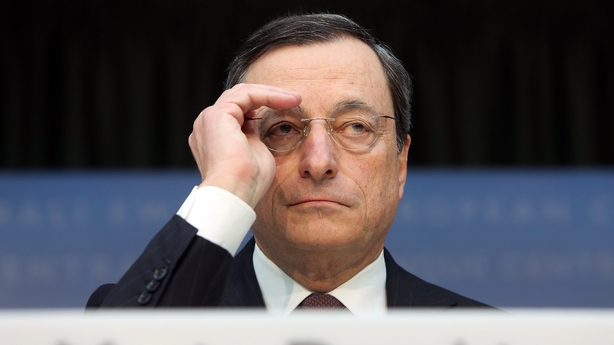 Some rate-setters had already expressed a preference for dropping a pledge to increase bond buys if necessary but the majority batted back the idea as premature.

The ECB has long flagged a discussion about changes in its communication stance for "early" 2018 but policymakers said they have not yet started that process and it was not yet clear if they would have such a discussion at the next meeting in March.

Markets have calmed since the ECB's meeting and US officials have also toned down their rhetoric.

While the euro is 4.5% higher against the dollar than six months ago, it has fallen around 2% lower from a recent peak.

Its downward drift to current levels is likely to comfort ECB policymakers who accept some firming is justified by the euro zone's exceptional economic run.

The impact of currency movements on inflation has meanwhile weakened sharply since the financial crisis a decade ago, meaning a moderate currency move is less of a headache for policymakers.

In the next move to claw back stimulus, the ECB could drop a long standing pledge to increase asset purchases, if necessary, its so-call easing bias, sources close to the discussion told Reuters earlier.

While such a move would clearly signal the ECB's intent to move towards ending unconventional support for the economy, it would still be just an incremental step, particularly as few if any investors see a realistic chance for bigger bond purchases.