Central Bank Governor Philip Lane has been withdrawn from the race to become vice president of the European Central Bank.

That has paved the way for Spanish finance minister Luis de Guindos to be appointed to the role.

Professor Lane was one of two candidates for the vice presidency, alongside Mr de Guindos, however his names was withdrawn by Minister for Finance Paschal Donohoe after it became clear that he did not have the required support.

Mr Donohoe said that Professor Lane was "an exceptionally well-qualified candidate who would make an ideal person to serve on the Executive Board of the European Central Bank".

He added that he had received "very positive feedback and expressions of support in relation to the candidacy from many member states who acknowledged how well-qualified Philip would be for the position".

However, he said he was withdrawing the governor’s nomination, as it was in the interest of the ECB that the position be filled on the basis of consensus.

Mr Donohoe gave his congratulations to Mr de Guindos, who he said had an excellent track record as Spain's finance minister.

"I want to wish him every success in his future new role. I also wish to reiterate my appreciation to Professor Philip Lane for putting himself forward as a candidate, whose ability and expertise was widely praised throughout the process." 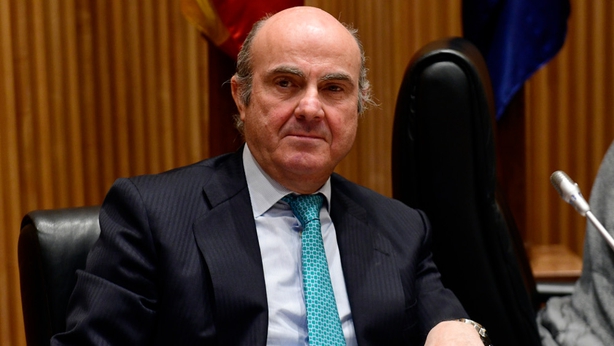 The choice of a Southern European for vice president increases the likelihood that a northerner such as German Bundesbank governor Jens Weidmann could be elected to replace Mario Draghi as head of the ECB in 2019.

This could influence the bank's ultra-loose monetary policy for the 19-country common currency area.

"The Eurogroup (of euro zone finance ministers) today gave its support to the candidacy of Luis de Guindos for the position of Vice President of the European Central Bank (ECB)," an EU statement said after a brief discussion among finance ministers.

After being chosen as ECB vice president, De Guindos said he would resign as Economy Minister within days.

Some EU lawmakers opposed his appointment fearing the nomination of a politician could affect the independence of the ECB. But Mr de Guindos dismissed this criticism.

Ministers said the appointment of Mr de Guindos should be finalised by EU leaders in a regular summit on 22-23rd March.

The European Parliament's economic committee, which has only a consultative role, said after an informal hearing of both candidates last week that Lane was a better choice.

Spain, the euro zone's fourth-largest economy, has not had a representative on the executive board of the ECB since Jose Manuel Gonzalez-Paramo's term ended in 2012.

Ireland has never held a post in the ECB at all, but Lane is widely seen as a top candidate to become ECB chief economist when Peter Praet leaves his position next year, eurozone officials said.

However when asked if Professor Lane could be a candidate to become the ECB's chief economist, Mr Donohoe said they would take things "election by election".