Today's figures showed that exports of medical and pharmaceutical products increased by 17% in 2017 compared with 2016, while exports of food and live animals rose by 12%.

The CSO said that imports of chemicals and related products increased by 16% in 2017 compared with 2016.  Imports of mineral fuels, lubricants and related materials jumped 24%, but imports of other transport equipment - including aircraft - decreased by 9%.

Today's figures also show that exports to Great Britain increased by 8% to €14.454 billion last year compared with 2016 - confounding fears of a sterling-induced fall. 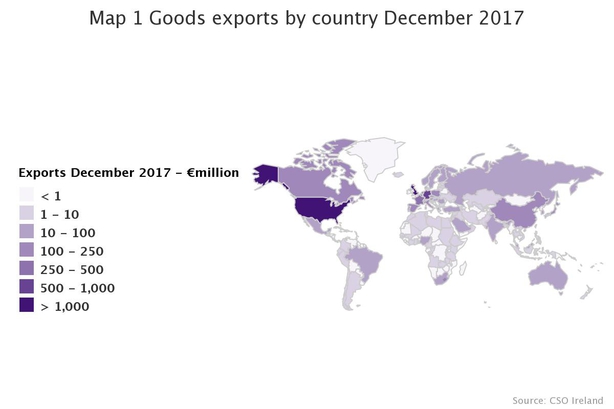 But the medium-term threat of a hard Brexit remains a cloud on the horizon, he cautioned.

Merrion economist Alan McQuaid also cautioned about the possible impact of Brexit on trade performance but said, at present, Irish exporters have strong momentum. "The trade outlook going forward remains clouded in uncertainty due to Brexit but we are still anticipating another solid performance this year. Indeed, we are at this juncture projecting another record surplus, of €47bn," he said.