London's FTSE index closed up 1.9% this evening after the index had shed 2.6% yesterday as global indices slumped on high US inflation worries.

Frankfurt's DAX index climbed 1.7% and the Paris CAC had risen 1.8% when trading finished. Both indices had closed down by almost 2.5% yesterday.

In see-saw trade, Dublin's ISEQ index closed up 1.9%, after it fell over 1% yesterday.

The Nikkei index, which yesterday fell nearly 5% in the worst loss since the November 2016 election of Donald Trump as US president, rose 0.16%.

The Nikkei had opened sharply higher, surging nearly 3.5% at one point as investors bought on dips following the recent slumps. 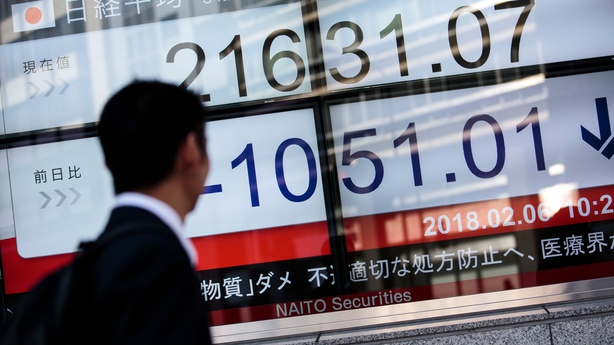 But early gains were gradually eroded with investors still nervous and uncertain if the market is now on course to recovery.

Wall Street plunge looks like correction not a crash

Bargain-hunters last night swooped in to buy Wall Street stocks, stemming a haemorrhage that had been spreading panic among investors globally.

But within minutes a fierce battle appeared to be playing out between those betting on further declines, and those who thought that the market correction had gone too far, leading to some wild price gyrations.

However, shares in Hong Kong ended with fresh losses today as an initial rebound from the previous day's 5% collapse fizzled out. The Hang Seng Index slipped 0.89%.

Minister for Finance Paschal Donohoe said he and his department were monitoring the market volatility, but noted that it came on the back of "an upward trend continuously since 2009".

He said there was a need for the Government to focus on what it can influence, including balancing the budget and improving the economy's resilience in the face of any potential upheaval in the future.