Irish shoppers spent an extra €90m on groceries over the Christmas period, with the average household spending a record €1,532 on groceries, an increase of €38 on the previous year.

The latest grocery market share figures from Kantar Worldpanel in Ireland show that Dunnes Stores remained the top Irish supermarket with the company holding a market share of 23%.

Tesco also performed strongly and saw its highest sales growth since February 2011 - an increase of 5.8% - to bring its market share to 22.8%.

The figures, which cover the 12 weeks ending 31 December, also show that SuperValu clocked in sales growth of 2%, which brought its market share to 22.4%.

Lidl also saw a positive performance over the Christmas period, with market share rising to 10.4% thanks to sales growth of 4.8%.

Aldi's sales rose by 0.9% but this was below the overall market level and led to a slight dip in market share to 10.3%. 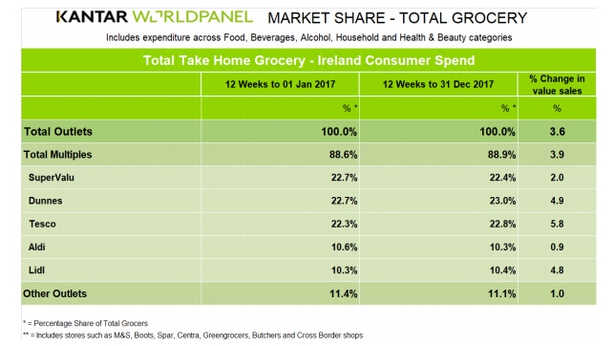 David Berry, director at Kantar Worldpanel, said the average household spent a record €1,532 on groceries over the Christmas period.

"Much of this increase has been driven by staple items, with fruit, vegetables, meat and poultry posting a combined sales increase of €28m," Mr Berry said.

He also noted that shoppers were partial to a Christmas tipple with sales of alcohol up almost 6% - a boost of €13 million.

"Wine was the drink of choice this year with white wine and red wine sales up an impressive 10% and 12% respectively," he added.