A new report has found that 36,218 new homes were added to the GeoDirectory database in 2017, 1.8% of the total residential stock.

The total stock of dwellings homes in the country in December of this year 2017 stood at 1,974,349, according to he latest GeoView Residential Buildings report.

The new report also showed that the overwhelming majority of these new homes were located in Dublin and surrounding counties with Dublin, Meath, Kildare and Wicklow accounting for 77.4% of the overall total.

It also noted that Leitrim had the lowest number of new addresses in the country, with only 74 properties added to the database last year, 0.2% of the national total.

The report said that while the construction industry responded positively to demand for housing during the year, the level of demand is still far greater than supply.

The GeoDirectory database also estimated that a total of 95,114 dwellings in the country were vacant, 4.8% of the overall national residential housing stock.

This represents a slight decrease on the previous GeoView report in June 2017, which estimated the vacancy rate to be 4.9%.

Of the 26 counties examined, 14 recorded vacancy rates above the national average. Leitrim (16.4%), Roscommon (13.8%) and Mayo (13%) were the counties with the highest vacancy rates.

At the other end of the spectrum, Dublin (0.8%) and commuter counties Kildare (2%) and Wicklow (2.5%) recorded the lowest vacancy rates. 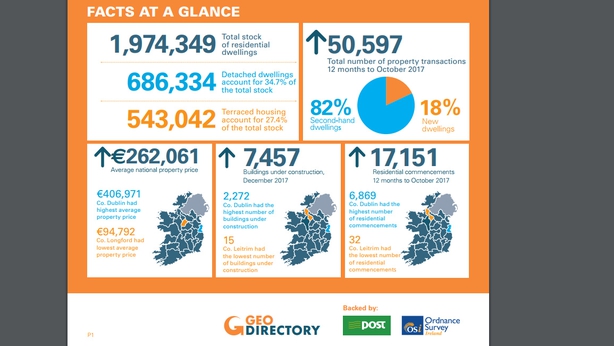 Combining data from the GeoDirectory database and CSO figures, the GeoView Residential Buildings report estimated that the average rate of housing turnover was 2.5%, an increase on the 2016 rate of 2.1%.

These five counties, all located in the Leinster region, were the only counties to exceed the national turnover average.

Meanwhile, construction activity has doubled compared to the time period last year, with 7,457 buildings under construction in December 2017 - an increase of 52%.

This construction activity was mainly concentrated in the Leinster region, which accounted for 63.4% of the overall total.

"However, building is heavily concentrated around Dublin and surrounding counties, while demand for housing stock remains at a high level. While progress has been made, there is still work to do in order to meet demand," Dara Keogh added.