The economy grew by 4.2% - in GDP terms - in the third quarter of this year compared to the second quarter, new figures from the Central Statistics Office show.

The CSO said the economy, as measured by GNP - which strips out cross border flows of multinationals - grew by 11.9% in the third quarter of 2017 compared to the second quarter of this year.

The quarterly growth was driven by a 4.4% rise in exports of goods and services and a 1.9% increase in personal consumption, which is a key indicator of economic activity.

The third quarter also saw strong performances in the manufacturing sector and in the information and communication sectors. The constuction sector also recorded growth, but the farming, fishing and forstry sector slowed.

The CSO also said today that initial estimates show an annual increase of 10.5% in GDP for the third quarter of this year compared to the same time last year.

The CSO noted that large imports of intellectual property and aircraft related to the leasing sector - which have distorted figures in the past - were absent in the latest three-month period.

The Department of Finance expects GDP to grow by 5.1% this year, likely making the country Europe's best performing economy for the fourth consecutive year.

Today's figures also show that the country's GDP is up 7.4% so far this year, far ahead of official forecasts.

The relevance of using GDP as an accurate measure of the economy was called into question last year when 2015 growth figures were adjusted up to 26% after a massive revision to the stock of its capital assets.

While not as dramatic, this year's quarterly data has also fluctuated sharply. 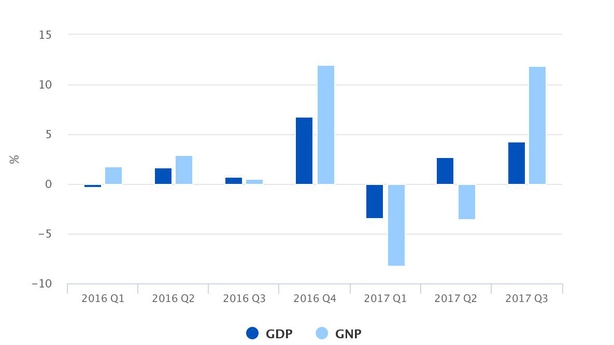 The expansion in the third quarter followed a revised 2.7% rise in the second quarter and a 3.4% contraction in the first three months of the year.

The CSO has begun to phase in a new measure - "Modified Gross National Income", or "GNI*" - which strips out the effects of multinational firms re-domiciling, relocating or depreciating their capital assets.

It will be fully phased in by the end of 2018 and has shown that at €189 billion, the economy is nearly one-third smaller than the size suggested by the GDP figures.

A sub-index of that new series - modified total domestic demand - rose by 2.9% on a quarterly basis.

Economists often prefer to use more consistent data such as retail sales and employment as a gauge of how the economy is faring.

The unemployment rate has fallen to 6.1% from 15.9% five years ago, while retail sales have grown strongly as well. 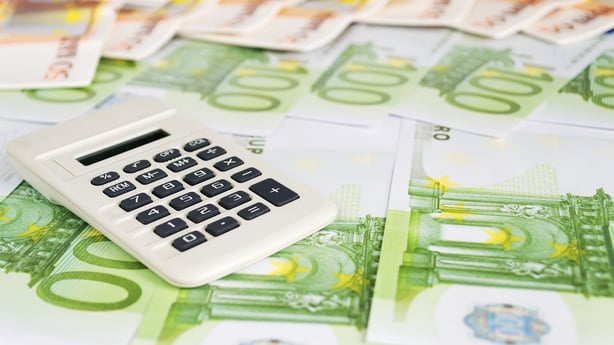 Commenting on today's figures, Merrion economist Alan McQuaid said that all in all, the latest GDP numbers are very positive, especially when one allows for the distortions of intellectual property on the economy.

"But it is clear that all forecasts for Irish economic growth this year are way too low. Even allowing for some slowdown in the final quarter, it now looks like GDP growth in 2017 will be around 7%," the economist said.

Describing the volatile GDP numbers as "an analyst’s nightmare", Davy's David McNamara said the 4.2% surge in GDP and the upward revisions to prior quarters mean that its full-year GDP forecasts will have to be raised from the current 5%.

"However, the underlying story remains the same - one of a robust recovery in consumer spending and investment. This domestically-driven output is growing at about 5%, meaning that Ireland is still the fastest growing economy in Europe," he added.

Separate figures from the CSO today also show a current account surplus of €14.488 billion for the third quarter, up from the €1.154 billion reported the same time last year.

The CSO said that increases of €2.065 billion in profit inflows in the three month period - mainly due to increases in the profits earned abroad by multinationals - offset a strong increase of €3.071 billion in direct investment profit.

The Balance of Payments figures also show a surplus of €3.353 billion on trade in goods and services with the UK. This was offset by a deficit of €2.633 billion on income flows, which resulted in a current account balance of €720m.