The chairperson of the Competition and Consumer Protection Commission has told the Oireachtas Finance Committee there is no evidence of any breaches of competition law by banks in relation to the tracker mortgage scandal to warrant a criminal investigation.

When asked by Sinn Féin's Pearse Doherty whether her agency had any suspicion of cartel behaviour between the banks over trackers, Isolde Goggin said the CCPC "cannot go on a fishing expedition" as it would be thrown out of court.

She said it was definitely in the "banks' interest to get people off tracker mortgages".

But "we can't search for evidence on the basis they did something, which was clearly in their own financial interests to do, and which they had very good reasons to do, bad reasons in terms of how they went about it," she stated.

"We would need something more than the fact that each bank did something that was in their own economic interest at that point, to ground a warrant," she said.

The CCPC Chairperson added it was the view of the agency that the way financial institutions have been treating customers is "totally unacceptable" and consumers have been "categorically let down".

Ms Goggin also said what was most concerning for the CCPC was "the apparent lack of a culture of compliance, which seems to be deeply ingrained in the financial industry".

Isolde Goggin pointed to two reasons - the heightened risk of lending and the lack of competition in the Irish market.

She said the boom and bust the country had experienced, together with the relatively high number of repossession proceedings in Ireland make lending here a riskier proposition than other euro zone countries.

She also said the fact that a number of players have left the market in recent years had resulted in less competition among lenders, which has contributed to higher interest rates in Ireland.

Financial Services Ombudsman Ger Deering today told the Oireachtas Finance Committee that Permanent TSB has appealed four of his office's decisions in 2011 to the High Court.

These findings had directed the bank to return customers to their tracker mortgages.

In August 2012 the High Court affirmed two out of four of the decisions.

Permanent TSB then appealed these two decisions to the Supreme Court, and all PTSB tracker complaints with the FSO were put on hold while this happened.

It was February 2015 before PTSB withdrew its Supreme Court appeal, by which time the Central Bank had started enforcement action against the lender over the tracker issue. 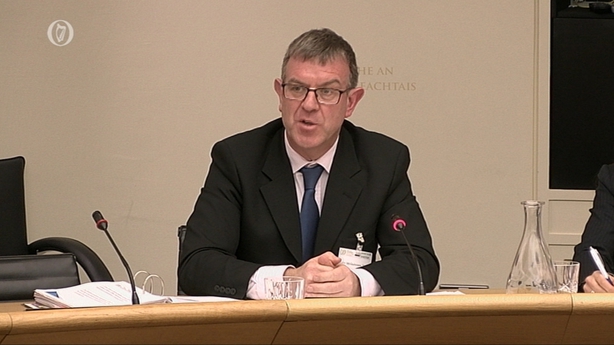 Mr Deering added that banks initially said they would not include complainants to the FSO in their redress schemes, but after he wrote to the lenders' chief executives, they committed to include them.

He said some complaints to his office in relation to the tracker scandal were from people who never even held a tracker mortgage, but were unhappy about never been offered one.

The Finance Committee is today focusing on consumer protection aspects of the tracker mortgage issue.

The FSO has been dealing with tracker mortgage complaints since 2009.

He said of the 1,838 complaints received, findings were issued in respect of 683 of them.

17% of complaints were upheld and in these cases the financial institutions were directed to restore tracker mortgages to affected customers.

The FSO is currently dealing with 540 open tracker complaints, Mr Deering said, adding that around 80 of these 540 cases are "in scope".

He added the FSO still continues to receive complaints over the tracker scandal, with 20-30 new complaints per month on average.