Residential property prices rose by 12.8% in the 12 months to September, new figures from the Central Statistics Office show.

It is the fastest annual rise in more than two years. This compares with an 11.8% annual rise in August and an 8% increase in the year to September 2016.

In Dublin, the annual property price rise in September was 12.2%. House prices in the capital were 12.4% higher, while apartment prices increased by 11.4%.

The highest house price growth was in Dublin City, at 13.9%, with the lowest growth in Dun Laoghaire-Rathdown (+9.9%).

According to the CSO, property prices in the rest of the country were 13.2% higher in the year to September.

Outside Dublin, house prices saw a 12.8% increase over the period, while apartment prices rose by 15.5%.

Despite the increases, the Residential Property Price is still 23.7% lower than its peak in 2007.

A recovery in prices that began in 2013 has accelerated sharply across the country this year on the back of a long-standing lack of supply combined with surging demand.

Prices were up 2% on a monthly basis in September, the CSO said.

This means that prices are 23.7% below the peak hit at the height of a property bubble a decade ago at the end of September compared to 29% three months earlier.

Today's CSO figures show that in the 12 months to September, the mean - or average - market price paid by households for a dwelling was €265,287. 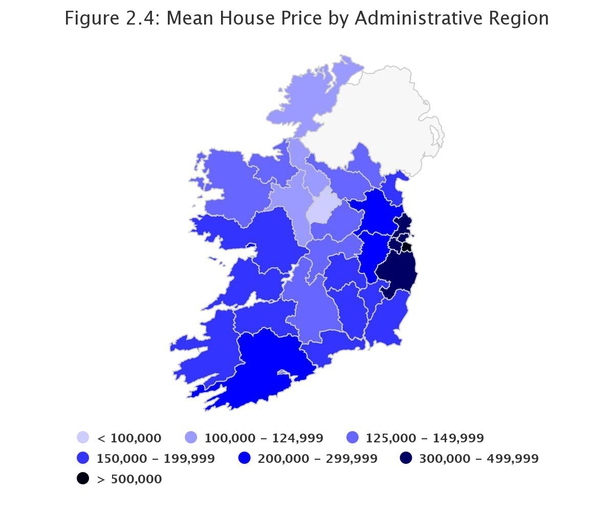 The mean price paid by households was higher in Dublin than in any other region or county and stood at €419,983.

The next most expensive region was the Mid-East, where the mean price paid by households was €265,898.

Within that area, Co Wicklow was most expensive, with a mean price of €331,456, making it the second most expensive county after Co Dublin.

The cheapest region for household purchases over the last 12 months was the Border region, with a mean price of €126,185.

The least expensive county was Co Longford in the Midland region, with a mean price of €93,622.