New figures from the Central Statistics Office show that residential property prices at a national level increased by 12.2% in the year to August.

This compares with a revised increase of 11.6% in the year to July. On a monthly basis, residential property prices rose by 2% in August from July.

The CSO said that residential property prices increased by 11.9% in Dublin in the year to August.

Residential property prices outside of Dublin were 12.6% higher in the year to August, today's figures show.

House prices in the rest of Ireland outside of Dublin rose by 2.3%, while apartment prices jumped by 15.4%

Today figures show that in the 12 months to August, the median price paid by households for a home was €215,000.

Earlier this year, the CSO said it would shift focus to median prices from mean prices in its publications and tools.

It said that the median price is a more appropriate tool of central tendency or what the typical buyer pays than mean price, as the latter is often skewed by exceptional high value properties.

Today figures also reveal that in the 12 months to August, 42,282 home transactions were filed with the Revenue Commissioners. 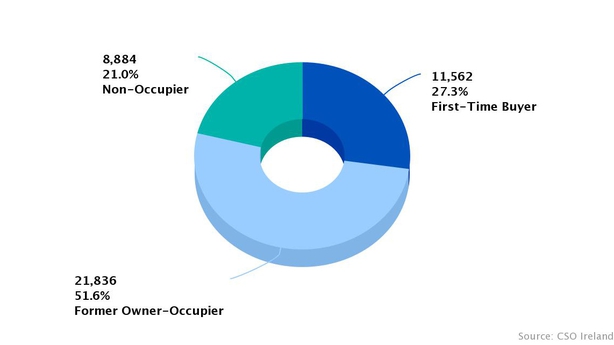 In August a total of 1,132 first-time buyer purchases were filed with Revenue, up 20.2% on the same time last  year.

Commenting on today's figures, Merrion economist Alan McQuaid said that property prices are "only going one way in the short-term until the supply issue is resolved".

Mr McQuaid said that housing has now overtaken health as the main political "hot potato", and the key focus in Tuesday's Budget was on measures/initiatives that should help alleviate the problems going forward.

"One can argue until the cows come home as to the merits of the proposals announced, but at least the Government has taken a step in the right direction, with an acknowledgement that something dramatic needs to be done and sooner rather than later," he added.