The country experienced the largest growth in its population since 2008 in the year to April 2017, new figures from the Central Statistics Office show.

The CSO also said the country saw the highest level of net inward migration since 2008.

The number of immigrants in the year to April is estimated by the CSO at 84,600 while the number of emigrants leaving Ireland is estimated at 64,800 - resulting in a net inward migration of 19,800. 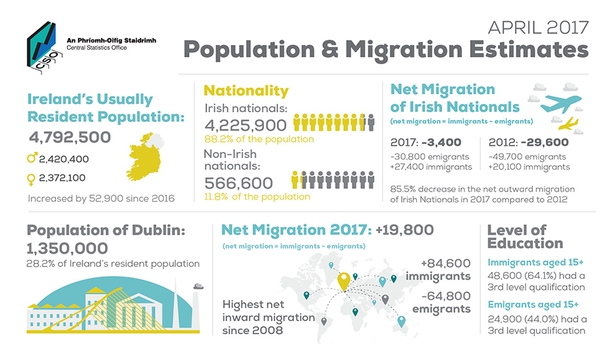 "The effect of this natural increase and positive net migration resulted in an overall increase in the population of 52,900," commented the CSO's James Hegarty.

"The key drivers of Ireland's demographic dynamics are a comparatively large number of births relative to deaths as well as a much greater variability in migration than in most other countries due to the particular sensitivity of Irish migration flows to domestic economic conditions," he added.