Overall economic output or GDP rose by 1.4% between April and June compared to the first quarter, new figures show today.

Figures published by the Central Statistics Office show the economy grew by 5.8% in the second quarter of this year compared to the same time last year.

The Quarterly National Accounts figures also show that GNP, which factors out profits from multinationals, fell by 4.6% in the second quarter.

This was due to profit transfers made by foreign owned companies with operations here.

Jennifer Banim, Assistant Director General with responsibility for Economic Statistics with the CSO, said that "apart from small contractions in the construction and real estate sectors all other sectors of the economy experienced some growth".

But consumer spending - which the CSO noted is "an important measure of economic activity" - fell by 1.1% in the three month period.

The country's GDP data was called into question last year when 2015 growth figures were adjusted up to 26%after a massive revision to the stock of its capital assets.

While not as dramatic, recent quarterly data has fluctuated sharply.

The expansion in the second quarter followed a revised 3.5% contraction in the first three months of the year and a 5.8% jump in the final quarter of 2016. 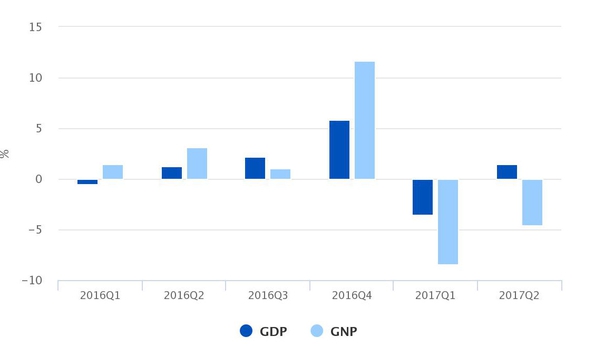 Some economists prefer to use employment as a gauge of how the economy is faring.

The number of people in work has been growing at the fastest pace since the financial crisis, pushing the unemployment rate down to 6.3% from 15.1% five years ago.

The CSO has also stated to begin to phase in a new measure - "Modified Gross National Income", or "GNI*" - which strips out the effects of multinational firms re-domiciling, relocating or depreciating their capital assets.

It will be fully phased in by the end of 2018 and has shown that at €189 billion, the economy is nearly one-third smaller than the size suggested by the GDP figures.

The CSO said today that a sub-index of that new series - modified total domestic demand - rose by 4.5% quarter-on-quarter.

This compared to a 19.1% jump in the traditional indicator for domestic demand under GDP.

"We see positive trends across the economy, with few exceptions," Michael Connolly, a senior statistician at the CSO, told today's news briefing.

Separate figures from the CSO today also show that a current account deficit of €872m was recorded in the second quarter of 2017, an improvement on the €1.653 billion current account the same time last year.

The Balance of Payments figures shows a surplus of €3.8 billion on trade in goods and services with the UK, which was offset by a deficit of €3.5 billion in income flows.

Commenting on today's CSO figures, the Minister for Finance and Public Expenditure and Reform said the country is on target to meet its target for gross domestic product growth of 4.3% this year. 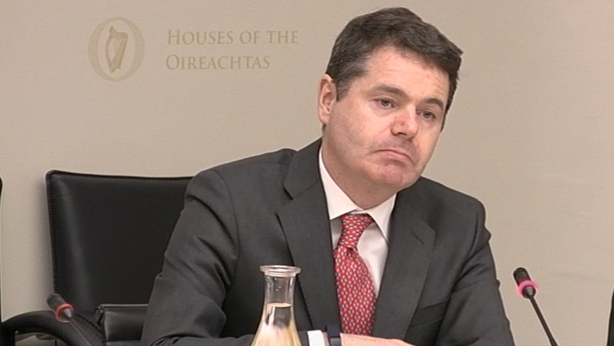 "The next set of macroeconomic projections will be published with the Budget in mid-October. On the basis of today's data, there will be no significant change to the GDP forecast this year," the Minister added.

But Mr Donohoe also said that despite today's positive figures, the Government must not become complacent.

"In particular, the recent appreciation of the euro emphasises the need to continue to improve our competitiveness, including by focussing on costs we can control, by boosting our productivity and ensuring sustainable public finances," he stated.

Merrion economist Alan McQuaid that that all in all, the latest GDP numbers are positive, especially when one allows for the distortions of IP products on the economy.