Residential property prices nationwide jumped by 12.3% in the year to July, new figures from the Central Statistics Office show with Dublin property prices rising faster than those outside of the city.

The 12.3% increase compares with a rise of 7.1% the same time last year and marks the fastest monthly growth in three years.

On a monthly basis, residential property prices rose by 3% in July compared to June - the second highest monthly increase on record.

A lack of supply combined with surging demand is pushing prices higher. Prices are also boosted by an easing of Central Bank lending rules, a Government subsidy for first-time buyers and continued strong economic growth.

Today's figures show that residential property prices in Dublin jumped by 12.7% in July with Dublin house prices up 12.6% while apartment prices rose by 12%.

The CSO noted that the highest house price growth was in Dublin City at 13.6%, while the lowest was in Fingal with growth of 7.4%.

Meanwhile, residential property prices in the rest of the country increased by 11.7% in the year to July.

House prices in areas outside of Dublin rose by 11.8% while apartment prices increased by 13.7%. 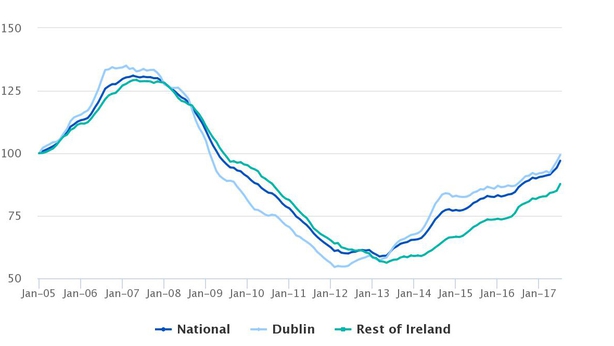 Today's figures also show that in the 12 months to July, the median price paid by households for a home on the residential property market was €212,500.

The CSO noted that from the low point in early 2013, prices nationally have increased by 60.5%.

Nationally, prices are still 28% below the peak they hit in 2007 at the height of the property bubble.

The CSO also said today that it was shifting focus to median prices from mean prices in its residential property price publications and tools.

It said that while it will continue to publish both median and mean residential property price statistics in its tables, median prices will be emphasised in the publication format.

"Median price is a more appropriate measure of central tendency or what the typical buyer pays than mean price, as the latter is often skewed by exceptional high value properties," commented Gregg Patrick, the lead statistician for residential property price statistics.

The mean (or average) is the sum of the group (for example - ages, wages or prices) divided by the number in the group.

The median is found by ordering the group characteristics in ascending value and selecting the middle one.

The CSO said that the median is a better measure of the central tendency of the group as it is "not skewed by exceptionally high or low characteristic values".

Commenting on today's figures, Goodbody economist Dermot O'Leary said that price inflation in Dublin exceeded that of the rest of the country for the first time in over two years in July.

"The Dublin market suffered disproportionately as a result of the initial introduction of macro-prudential rules in 2015, but inflation has been accelerating for the past 12 months as this effect washed through and the mortgage rules were eased," he said.

He also that the proportion of Help-to-Buy eligible transactions has also been growing, accounting for 4.5% of total transactions in the past year.

"A review of this scheme is currently being finalised, with the latest reports suggesting that it will be retained. We remain of the view that the supply side factors are the biggest contributor to the acceleration in house price growth and the policy focus should be in this area," the economist said.