The European Central Bank has left its ultra easy monetary policy stance unchanged as expected, keeping rates at record lows and even leaving the door open to more asset buys if the outlook worsens.

After ECB chief Mario Draghi raised the prospect of policy tightening last month, he signalled that any policy tweaks would come only gradually, setting the scene for a possible discussion in September about a long-awaited tapering of its asset buys.

"We need to be persistent and patient because we aren't there yet, and prudent," Mr Draghi told his regular news conference after a meeting of ECB policy-makers in Frankfurt.

He stressed that the bank's governing council was unanimous both on the decision to keep its guidance unchanged and to avoid setting a precise date for a discussion of future policy, noting only that it would occur in the autumn.

With the euro zone economy now growing for the 17th straight quarter, its best run since before the 2007-08 global financial crisis, that at least suggested the ECB is starting to contemplate easing off the accelerator, preserving some firepower after printing nearly €2 trillion euro to jump start growth.

The prospect of reduced monetary stimulus has kept financial markets edgy, with investors sifting through clues to gauge how big central banks around the globe will unwind unconventional policy that have kept borrowing costs at rock bottom. 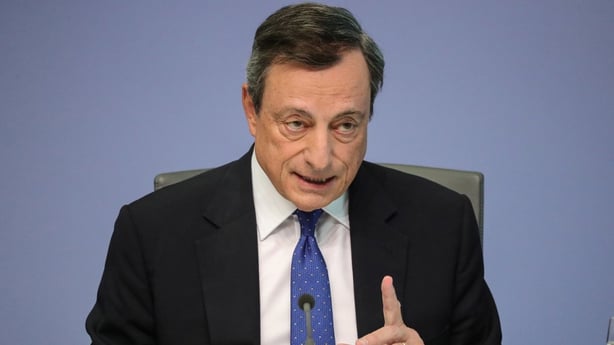 The euro and government bond yields across the bloc initially slipped after the statement. But as Mr Draghi spoke, the euro edged back above $1.15 and euro zone bond yields gained, ostensibly on his confirmation of expectations that the taper would be discussed in autumn.

The ECB earlier kept its deposit rate deep in negative territory and maintained monthly bond purchases at €60 billion, in line with the expectation of most analysts in a Reuters poll.

"If the outlook becomes less favourable, or if financial conditions become inconsistent with further progress towards a sustained adjustment in the path of inflation, the Governing Council stands ready to increase the programme in terms of size and/or duration," it said.

Mr Draghi sent bond yields and the euro sharply higher last month when he argued that improved growth on its own would provide accommodation so the ECB would tighten its own policy to keep the overall level of accommodation broadly unchanged.

Indeed, the euro's 11% rise this year will weigh on inflation, compounding the impact of a more than 10% drop in crude oil prices.

"As core inflation remains subdued, the ECB will likely prefer to err on the side of caution, that is moving more slowly rather than faster than many observers project," Holger Schmieding at Berenberg noted.

Still, the ECB is unable to kick the can down the road indefinitely as its asset buys are set to run until the end of the year and policymakers argue that a decision on an extension or a gradual wind down must be taken in September or October.

Policymakers told Reuters earlier that they would not want to put an end date on the buys or a schedule on tapering, maintaining flexibility and avoiding a perception that it was on a preset course.

The biggest headache for the ECB is the apparent disconnect between inflation and growth.

Having bought trillions of euro worth of government and corporate debt for years, the ECB has rekindled growth and the euro zone is creating jobs faster than expected.

But wage growth remains anaemic, keeping a lid on inflation, which is likely to undershoot the ECB's target of almost 2% at least through 2019.

This suggests that easy monetary policy will have to continue for years to come.