Residential property prices nationwide rose by 11.9% in the year to May, the latest figures from the Central Statistics Office show.

This marked the highest annual growth rate since April 2015 and compares with an increase of 10% in the previous month and a rise of 5.4% the same time last year.

Today's figures show that Dublin residential property prices increased by 11.2% in the year to May.

Dublin house prices were up 11.5%, while the price of apartments increased by 8%.

The CSO noted that the highest house price growth of 12.4% was seen in South Dublin, while the lowest - 6.8% - was recorded in Fingal.

Meanwhile, residential property prices in the rest of the country jumped 12.8% in the year to March.

House prices outside of Dublin increased by 12.2%, while apartment prices soared by 20.6%.

Property prices jump almost 12% in year to May pic.twitter.com/lLgII4d7oT

The Southeast region saw the greatest price growth - up 18.6% - while the Mideast region showed the lowest rate of growth at 8.7%.

House price growth has been accelerating amid a chronic lack of supply and a surge in demand for mortgages following an easing of the Central Bank's lending rules and the introduction of the Help to Buy scheme. 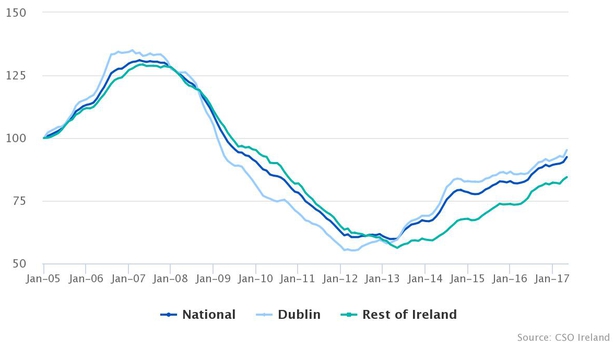 Today's CSO figures show that in the 12 months to May, the average market price paid by households for a dwelling was €249,358.

The average price paid by households was higher in Dublin than in any other region or county.

The average cost of a home in Dublin was €401,600. Of the four administrative areas of Dublin, Dún Laoghaire-Rathdown was the most expensive, with an average price of €564,034 over the year.

South Dublin was the least expensive, with an average price of €318,833.

The figures also show that after Dublin the next most expensive region was the Mid-East, where the average price paid by households was €249,966.

Within the Mid-East region, Co Wicklow was most expensive, with an average price of €317,585, making it the second most expensive county after Co Dublin.

The least expensive region to buy a home over the last 12 months was the Border region, with an average price of €118,427.

The least expensive county was Co Longford in the Midland region, with an average price of €90,502. 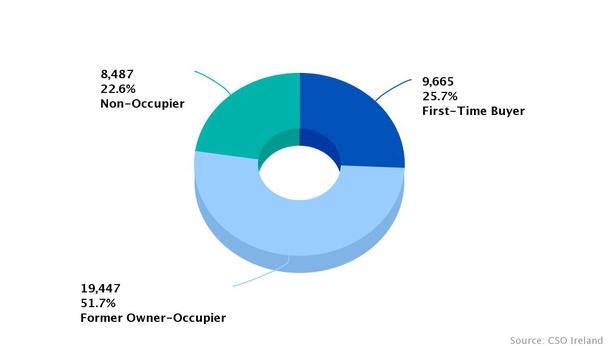 Today's CSO figures also revealed that in the 12 months to May, 37,599 household market dwelling purchases were filed with the Revenue Commissioners.

Davy economist Conall MacCoille noted that the average mortgage approval to first-time buyers increased by 10.2% in the year to May to €208,400.

He said this followed the relaxation of the Central Bank’s mortgage lending rules in late 2016, eliminating restrictions on the availability of 90% loan-to-value mortgages to first-time buyers.

The Help to Buy scheme has so far had 6,600 applications in 2017 - a significant number given that total residential transactions in 2016 equalled 48,500, he added.

Also commenting on today's CSO figures, Merrion economist Alan McQuaid said that prices are only going one way in the short-term until the supply issue is addressed.

Noting that first-time buyers continue to be priced out of the market, Mr McQuaid said that subsidising purchasers through tax breaks is not the answer, so maybe the time has now come to penalise investors.

He said that irrespective of which solution is proposed, there is likely to be some flaw.

"But if housing is about providing a place to live in at an affordable price, then those who want a house simply to live in should be given precedence over those who are in it purely for investment purposes and looking to make a quick buck," he added.