Irish construction firms have more than doubled their spending on UK imports amid the pound’s weakness in 2017.

According to analysis by FEXCO Corporate Payments, Ireland’s building firms have spent 152% more on UK goods and services through May than they did in the first five months of 2016.

FEXCO facilitates international payment solutions and analysed 1,304 transactions made by its currency dealers on behalf of Irish construction sector importers.

The frequency of UK imports purchased by Irish construction firms has also risen.

The construction industry is facing a situation where demand for both commercial and residential property exceeds supply.

"Buoyed by rising confidence, Irish building firms are understandably cashing in on sterling’s weakness by snapping up imports from the UK", Head of Dealing at FEXCO Corporate Payments David Lamb said.

Builders may be turning to UK imports to take advantage of favourable pricing, but Mr Lamb offered another possible motive as well. 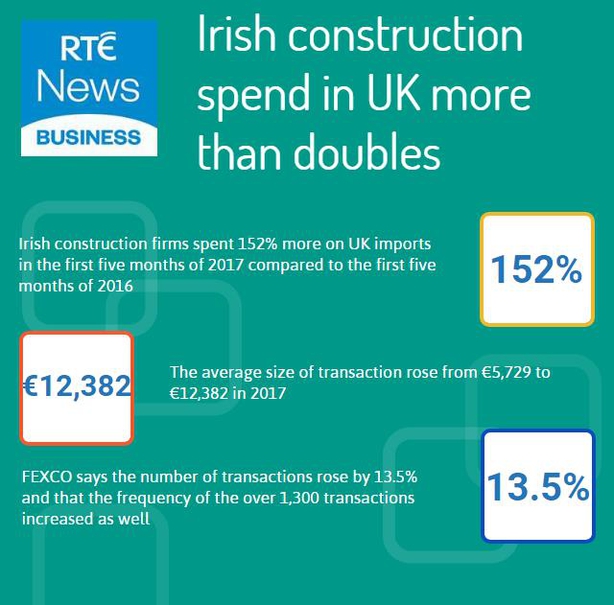 "Compared to this time last year, British goods and services are a bargain for Irish builders – but also an attractive way to offset rising cost pressures at home", he said.

A May study by construction consultancy firm Turner & Townsend listed Dublin as the eighth most expensive city for builders in the world.

The study predicted a shortage of skilled labour would drive costs of construction up a further 8% in the upcoming year.

With the political unpredictability of the upcoming UK general election and the beginning of Brexit negotiations, Mr Lamb provided words of caution.

"Irish builders who import regularly from Britain should consider locking in the current favourable exchange rate by using a forward contract", he said.