Fianna Fáil leader Micheál Martin has said the collapse of the trial of Sean FitzPatrick is a "damning indictment" of the Office of the Director of Corporate Enforcement.

Mr FitzPatrick has been formally acquitted by a jury at the Dublin Circuit Criminal Court on all 27 counts against him.

Judge John Aylmer ruled yesterday that he would be directing the jurors to acquit Mr FitzPatrick, who had pleaded not guilty to misleading Anglo's auditors about loans to him and people connected with him.

He said he had made a decision based on law that the prosecution had not established a sufficient case to go to a jury.

Taoiseach Enda Kenny said he agreed with Mr Martin and said the ODCE themselves had pointed out that they had undergone substantial change.

He said the Dáil had to make a decision about what to do with the organisation.

Enda Kenny: 'Let us as a parliament here, decide what it is we have to do with an organisation like the ODCE' https://t.co/7ur1xnzTsE pic.twitter.com/jFWhTZaJy9

Mr Kenny also said it would not have been possible for the Government to intervene when the case was under way.

Also speaking during Leaders’ Questions, Sinn Féin leader Gerry Adams said the staff of the ODCE had been cut previously from 42 to 35.

He said the Government spends €5m on the ODCE - by contrast €17m was spent on our membership of the European Space Agency.

"Doesn't that show where your priorities lie?" Mr Adams asked.

He said the Government should follow international best practice and replace the office with a robust agency underpinnned by legislation. 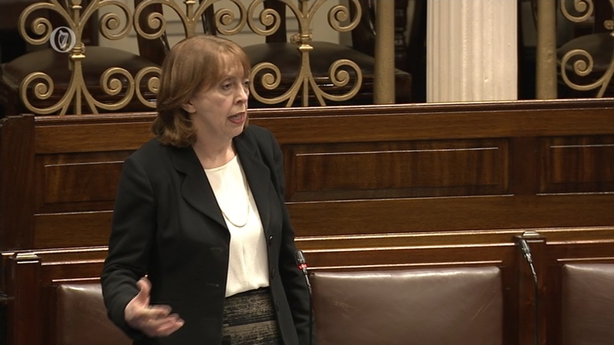 Earlier the co-leader of the Social Democrats, Róisín Shortall, said white collar crime needs to be taken seriously and there is a need for an independent anti-corruption agency to replace the ODCE.

Speaking on RTÉ's Morning Ireland, Deputy Shortall said the ODCE has clearly been under-resourced since its establishment, but that this does not excuse what happened during the FitzPatrick trial yesterday.

Ms Shortall said the mal-administration displayed by the ODCE was of "the most serious kind" and also involved their auditors and legal team.

She added that it was the third occasion on which Mr FitzPatrick has been acquitted, or a trial has collapsed.

Ms Shortall said no priority appears to have been given to the enforcement of the law in respect of white collar crime.

She said if people were to have confidence in the rule of law, in respect of both company and criminal law, then a new investigation and enforcement regime was needed.

In addition, she pointed out that other cases have been neglected while the ODCE investigated Anglo.

In a statement, the ODCE said it accepted a number of criticisms of the investigation from the trial judge, but pointed out that the practices dated back to 2009 and had since been overhauled.

It said the office was not equipped at the time to undertake parallel investigations on the scale involved.

It added that "serious failures" resulted in statements from two witnesses central to the prosecution being taken by civilian staff, none of whom had experience or training in taking witness statements.

It also accepted the judge's ruling that both witnesses were coached by the ODCE and that, as a result, their evidence was contaminated.

The statement said the shredding of documents by an ODCE staff member should not have occurred.

However, it said the events took place at a time when the staff member concerned was under enormous stress and "against a backdrop of significant mental health issues."

The statement pointed out that the organisational structures of the ODCE had undergone significant change in recent years following the appointment of a new director in the latter half of 2012.

It said staffing capabilities had been considerably enhanced through the recruitment of several investigative accountants as well as a digital forensics specialist and members of An Garda Síochána taking the lead on all criminal investigations.

It also pointed to a number of successful investigations in recent years, related to Anglo, that resulted in convictions.

In a further statement this evening, the ODCE said it was preparing, with high priority, a report on the issues arising from the investigation at the request of the Minister for Jobs, Enterprise & Innovation.

However, it said it was not in possession of complete information as regards all aspects of the trial as ODCE personnel were excluded from large portions of the trial on the direction of the trial judge.

The ODCE has requested the Office of the Director of Public Prosecutions to furnish it with full transcripts of the trial so that it can complete the report expeditiously.