Ireland’s trade surplus fell by €452m (-9%) in February following a 16% rise in imports and just a 3% rise in exports, according to new figures from the Central Statistics Office.

Exports of medical and pharmaceutical products increased by €827m (+37%) to just over €3 billion in February, when compared with the same month last year.

Exports of Electrical machinery, apparatus and appliances were also up, increasing by €159m (+28%) to €731m. 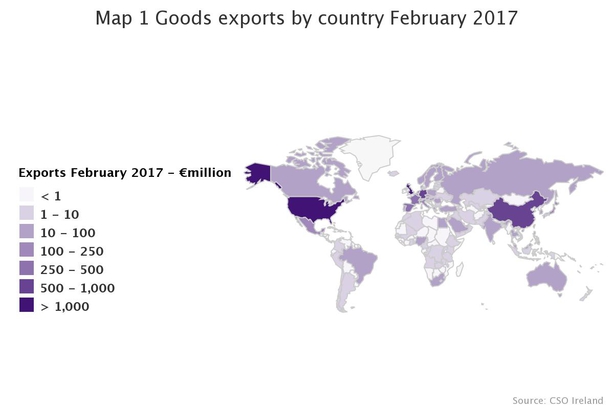 Exports to Britain were 19% higher during the month to €1.16 billion, while imports from the country showed a small decrease, dropping by 4% to €1.22 billion.

At €4.85 billion the European Union accounted for half of Irish exports in February. €1.15 billion of this went to Belgium, while the main non-EU destination for Irish exports was the United States, accounting for €2.95 billion. 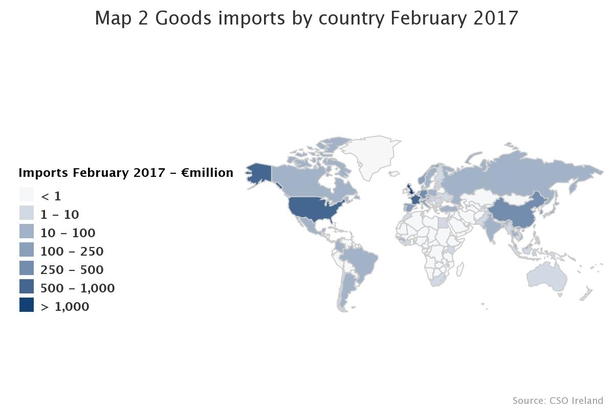 With regard to where Ireland’s imports are coming from, 63% came from the EU in February. €1.22 billion of this came from Great Britain.

In its assessment, Davy said: "Trade data for February show that exports have started the year on a solid footing.

"Goods exports were up 3.4% on the month and 15.5% on the year, driven by increases in both pharmaceuticals and traditional industries.

"Looking ahead, we expect a larger contribution to GDP growth this year from exports following a relatively weak 2.4% gain in 2016."