The Central Bank's head of enforcement Derville Rowland has confirmed the bank had spoken to the gardaí about the issue of tracker loans being wrongly taken from customers.

"We met the the gardaí to discuss the tracker issue," Ms Rowland stated.

Addressing today's Oireachtas Finance Committee, she said that where issues arise the Central Bank would make reports to the gardaí.

She added that the bank would always consider taking action against senior bankers who were responsible in relation to the tracker mortgage issue.

The issue of consumers being wrongly shifted from low interest mortgages to high cost loans has affected 10,000 tracker accounts.

Earlier, the Governor of the Central Bank said that it is clear lenders have failed their customers where issues have arisen in relation to tracker mortgages.

The Professor said he is acutely aware of the "unacceptable impact" that these failures have had on tracker mortgage customers, from the burden of paying more than they should, up to instances which involved the loss of ownership of homes.

He said the fair treatment of tracker mortgage borrowers has been a key supervisory and policy focus for the Central Bank over the past number of years.

The Central Bank has intervened with a number of lenders over the 2008-2015 period on a range of different issues in relation to these mortgages.

Fine Gael's Peter Burke said that many tracker mortgage customers who had approached him said they felt powerless in relation to engagement with their financial institutions.

He accused banks of ignoring people when they make efforts to engage to find out information around their cases. 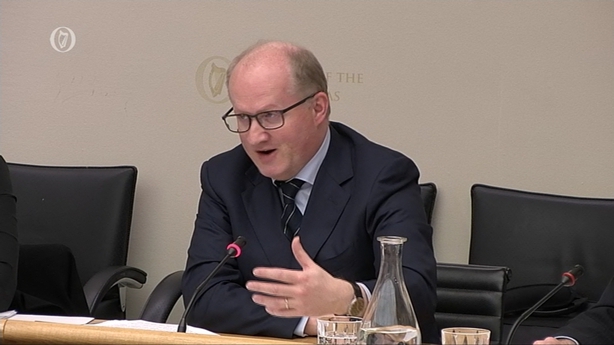 The Director of Consumer Protection at the Central Bank, Bernard Sheridan, said lenders have been requested to put in dedicated units to deal with customers who have queries.

However, he said the Central Bank was happy to take information from TDs and Senators if consumers are not getting fair treatment.

The Governor of the Central Bank also told the Committee today that rising house prices nationally should moderate over time as it triggers a supply response.

Professor Lane said the Central Bank is looking and evaluating data all the time.

When asked by Sinn Féin's Pearse Doherty if the Central Bank would intervene in relation to rising prices, the Professor said intervening on more than an annual basis would be too frequent.

He said the Central Bank would assess if it thinks there is a destabilising spiral.

However he assured the Committee that there are self-correcting features and pointed out that mortgages are not going above the three and half times income levels.

Mr Lane said it was vital that supply issues are tackled.

Brexit has had 'relatively benign impact' to date

Meanwhile, the Governor also told today's Committee meeting that the outlook for the Irish economy remains subject to uncertainty particularly in relation to Brexit and the post-Brexit trading relationship.

Professor Lane said that Brexit has had "a relatively benign impact" to date.

He said it was too early to accurately predict any Brexit-related effects on foreign direct investment.

But he added that the Central Bank has increased engagement with a range of entities including banks, markets firms, insurance authorisations and queries regarding payments and electronic money.

He told the Committee that enquiries have taken the form of discussions on potential new authorisations, possible balance sheet expansion or changes to business type.

The Central Bank Governor pointed out that potential new entrants pose a challenge to the Central Bank in terms of planning and prioritisation. But the bank is meeting the challenge, he added.

Professor Lane said a Brexit taskforce involving 15 divisions has been established in the bank.

"This functional approach is necessary given the potential for a more diverse cross-section of entity types and business models of entities supervised across all sectors," he stated.

The Governor of the Central Bank told the Committee that staffing was an ongoing challenge for the bank.

Philip Lane has said he would like to hire 200 people by the end of the year, in order to be fully staffed with 1,800 employees.

However, he said the nature of a Central Bank is that employees are "attractive" to firms who arrive in a country.  He predicted this would "get worse" with Brexit.

Professor Lane noted that it would be easier if pay levels were higher, however he acknowledged that the subject of pay was for a wider conversation on public sector pay.