UK inflation last month shot past the Bank of England's 2% target for the first time since the end of 2013.

UK consumer prices look set to climb further due to the Brexit hit to the pound and rising global oil prices.

Consumer prices jumped by a stronger than expected 2.3% in annual terms, their biggest increase since September 2013 and up sharply from 1.8% in January, the Office for National Statistics said.

Economists in a Reuters poll had expected a 2.1%. The scale of the jump between January and February was the biggest since October 2012.

The UK's vote to leave the European Union last June triggered a slide in the value of the pound, pushing up the price of imported goods.

Furthermore the same time, global oil prices have picked up, adding to the squeeze on the spending power of households.

The Bank of England has said it expects inflation will peak at 2.8% in the second quarter of next year but many economists say it is likely to hit 3%.

Inflation has also accelerated in the US and elsewhere in Europe.

While one of the Bank of England's policymakers last week voted for an interest rate increase, most other rate-setters have appeared to be in no rush to head off inflation.

This was largely due to weak wage growth and the uncertain prospects for the economy as Britain prepares to leave the European Union.

The ONS said transport costs, which were pushed up by rising fuel costs, were the biggest driver of inflation in February.

UK food prices rose in annual terms for the first time in more than two and a half years.

Retail price inflation - tracked by British inflation-linked government bonds - jumped to 3.2% in February from 2.6% in January.

Excluding oil prices and other volatile components such as food, core consumer price inflation rose to 2%, above economists' expectations of a 1.8% rise.

The ONS said a measure of consumer prices which includes housing costs, the CPIH, rose 2.3%, also its highest since September 2013.

Data on UK factory gate prices underscored the inflationary pressures in the pipeline. Output prices rose 3.7% in annual terms, the strongest increase since the end of 2011. The increase was in line with forecasts in the Reuters poll.

Prices paid by factories for materials and energy surged with the cost of crude oil almost doubling from a year earlier.

The ONS said house prices in January rose by an annual 6.2% across the UK as a whole compared with 5.7% in December. Prices in London alone increased by 7.3%, picking up speed from December.

The ONS also said the government narrowed the budget deficit in February, leaving finance minister Philip Hammond on course to make a sizeable cut to the shortfall in the 2016/17 financial year which is about to end. 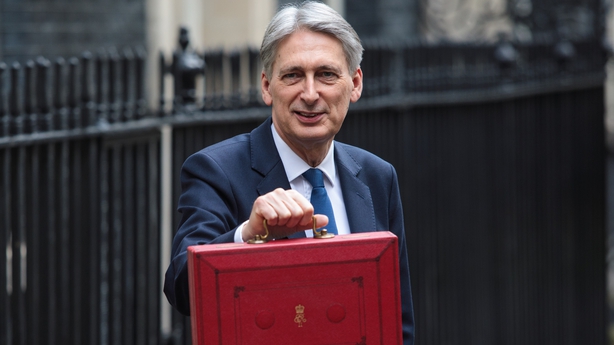 The shortfall narrowed to £1.8 billion, compared with £4.6 billion in February 2016, boosted by the highest tax receipts on record for the month of February.

In the first 11 months of the financial year, the deficit stood at £47.8 billion, down 29.4% on the same period in the previous financial year.

The UK's official budget forecasters this month predicted the shortfall would narrow to £51.7 billion, or 2.6%of gross domestic product, in the 2016/17 financial year.

That was a lot smaller than a forecast they made in November, largely reflecting the resilience of the economy so far to the Brexit vote.

Meanwhile, sterling jumped almost 1% to its highest level in three weeks today after that inflation data from the ONS.