Residential property prices rose by 7.9% in the year to January, new figures from the Central Statistics Office show, unchanged from the previous month.

Today's figures from the CSO show that property prices outside of Dublin rose at a much faster rate than those in the city in January.

According to the CSO, residential property prices in Dublin rose by 5.3% in January on an annual basis.

Dublin house prices increased by 4.9%, while apartment prices rose by 9.1%

The CSO noted that the highest house price growth was seen in South Dublin - at 6.8% - in January. This compared to the lowest growth rate of 2.9% in Fingal.

Meanwhile, residential property prices outside of Dublin grew by 11.3% in the year to January.

House prices in the rest of Ireland rose by 11.2%, while apartment prices raced 15.7% higher.

Today's figures also show that the average price paid for a dwelling over the last 12 months was €242,586.

The average price for a home in Dublin stood at €394,059, making it the most expensive area in which to buy.

Of the four Dublin areas, Dun Laoghaire-Rathdown was the most expensive with home prices there hitting an average of €551,239. 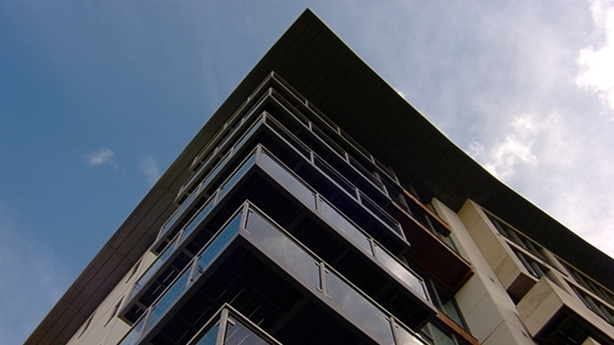 After Dublin, the next most expensive region for buying a home was the Mid-East region, with average prices there of €242,462. Within that region, Wicklow had the dearest house prices - with an average price of €312,744.

The cheapest area in which to buy over the last 12 months was the Border region, with an average price of €113,730 for a home.

The least expensive county in which to buy a home was Longford where the average price of a home was €87,647.

Today's CSO figures also reveal that there were 3,136 residential dwelling purchases filed with the Revenue Commissioners in January, an increase of 6.1% on the same time the previous year.

The total value of the market - based on transactions filed in January - was €773.5m.

The CSO noted that in the 12 months to January, a total of 37,398 house purchases were filed with Revenue. 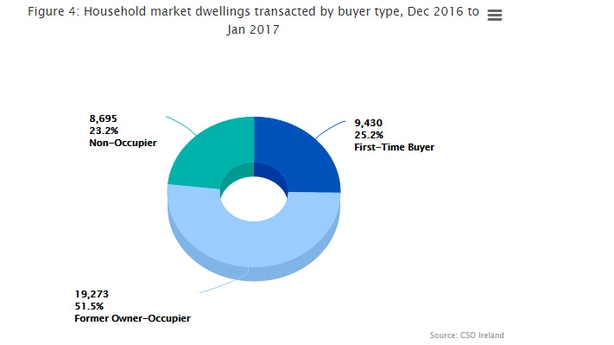 It also noted that the number of first-time buyers in January rose by 15.7% compared to the same month in 2016 as the Government's Help-to-Buy scheme and revamped Central Bank lending rules for first-time buyers came into effect.

Mr Hughes said that a broadening of regional reach of the economic upswing, affordability constraints and particularly limited supply in Dublin causing a shift in demand away from the city are all likely playing a role in the regional pricing dynamics.

However, he also noted that the monthly price change was slightly stronger in Dublin than elsewhere.

Merrion economist Alan McQuaid said that the easing of the Central Bank's mortgage lending restrictions and the tax-incentive scheme for first-time buyers will keep upward pressure on prices until new supply comes on the market.

"The real question is whether we need this type of incentive at all, with politicians seemingly not learning their lesson from the property crash/financial crisis," he stated.

"Taking all the factors into consideration, we see house price growth remaining in positive territory on a year-on-year basis for a while yet, with the annual rate of increase set to hold in the 6-9% range over the next few months," he added.

National residential property prices are on average 31.8% below the peak hit a decade ago at the height of the property bubble.