Women in management positions in Ireland earn 16% less than men, according to new research by Europe's statistical agency Eurostat.

The study also found that the average pay gap across the EU is 23%.

In Ireland, two out of every five managers are women, according to Eurostat.

That places Ireland's performance in terms of gender equality in management ranks ahead of France, Sweden and the UK. 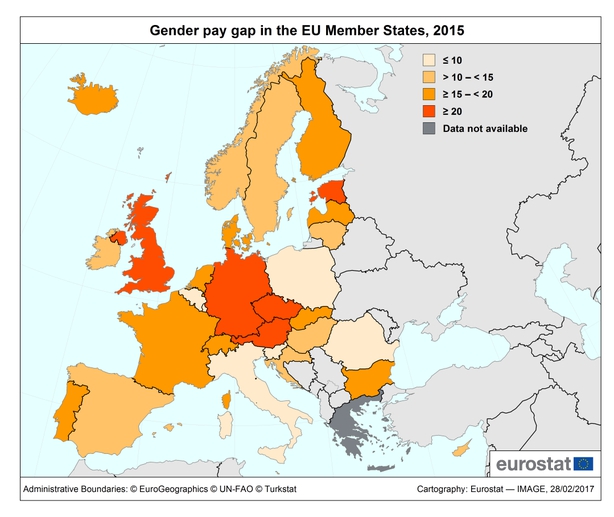 However, male managers are paid 16% more than females in management roles in Ireland.

In Hungary that gap is 33%, while the best performer is Romania at 5%.

But women are still significantly under-represented in Irish board rooms. Research by Credit Suisse Research Institute in 2015 revealed only 17% of directors are women in Irish companies.

The research has been published to mark International Women's Day, which this year has as its theme 'Be Bold For Change'.

Meanwhile, the head of the Association of Chartered Accountants in Ireland and Europe has said Irish businesses need to put policies in place to support more equality in the workplace.

Liz Hughes called on the Government to set up a working group to support businesses in implementing more progressive practices.

Speaking on RTÉ's Morning Ireland, Ms Hughes said that Ireland has a long way to go to bridge the equality gap.

She added that there were a number of different factors around women in the workplace, many of which concern family, with many female professionals removing themselves from the workplace at certain periods of time.

In addition, there was a need for strong mentors for women who, she said, were probably not as confident as men.