The Central Bank has cut its forecast for economic growth for this year due to a weaker outlook for exports.

In its latest quarterly bulletin, the Central Bank forecasts the country's GDP will grow by 3.3% this year, down from a forecast of 3.6% three months ago.

It has also predicted the economy will grow by 3% next year.

The Central Bank also cautioned today that Brexit remains the main downside risk to the economy.

However, it added the economy continues to grow at a relatively healthy pace, with strong employment growth.

It also noted that personal consumption expenditure is forecast to remain a key driver of growth.

It estimates the level of consumption per capita will return towards pre-recession levels by 2018.

The Central Bank had said last year that in its most pessimistic scenario, where increased tariff and non-tariff barriers significantly reduce trade flows between Ireland and the UK, GDP could be 3.2% lower over a period of 10 years.

"Looking ahead, while the prospects for sustained, solid growth remain positive, external factors, particularly uncertainties in relation to Brexit, pose risks to the outlook," the Central Bank said in today's bulletin.

"External uncertainties are heightening and, given the highly open nature of the Irish economy, risks to the forecasts are firmly weighted to the downside," it added. 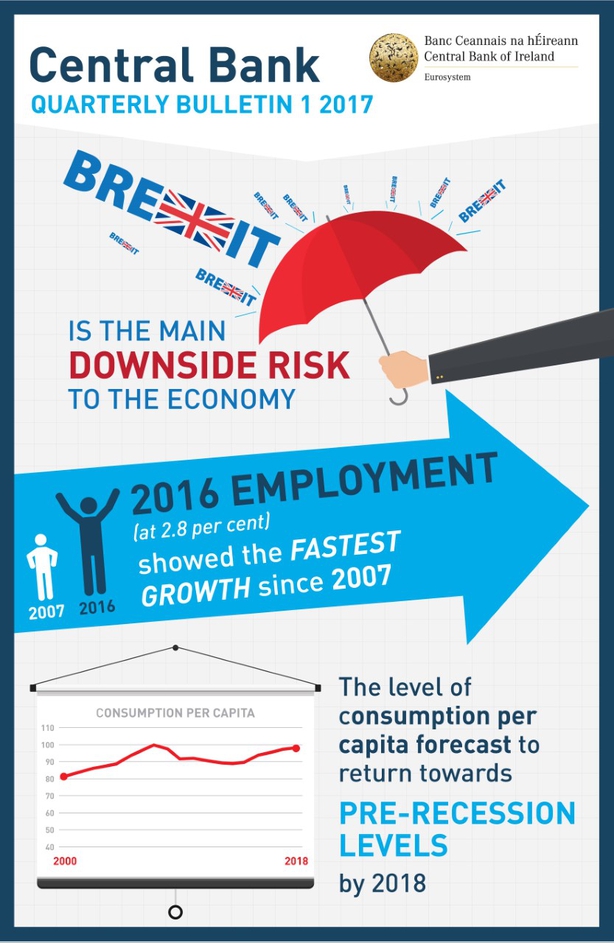 The bank's bulletin predicted that employment will grow by 80,000 over the two years, while unemployment is forecast to fall to close to 6% by the end of next year.

Central Bank Chief Economist Gabriel Fagan said the most reliable measures of domestic spending and economic activity suggest the economy continues to grow at a relatively healthy pace, though there are signs that growth momentum has slowed a little.

"Looking ahead, while the prospects for sustained, solid growth remain positive, external factors, particularly uncertainties in relation to Brexit, pose risks to the outlook," the economist stated.

"To date, in the absence of any weakening in the UK economy, the impact of the Brexit referendum outcome on the Irish economy has mainly been felt through the volatility in the euro/sterling exchange rate.

"Uncertainty in the period following the referendum vote was reflected in a marked weakening of business sentiment indicators, which subsequently rebounded strongly, suggesting a muted overall impact from Brexit-related factors over the second-half of 2016," he added.