Goods imports into Ireland jumped by €938m, or 18%, between October and November to €6.2 billion, according to new figures from the Central Statistics Office.

Exports for the same period fell by 1% to €10.2 billion, which resulted in a reduction of €995m in the trade surplus to €4 billion. 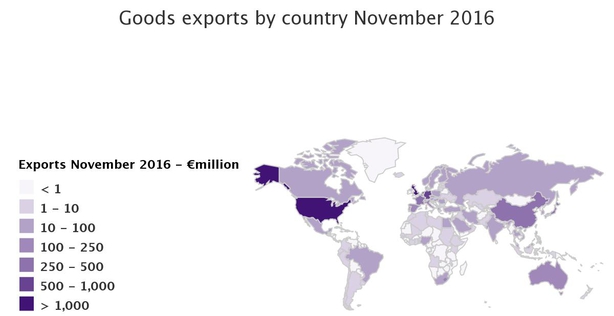 The European Union accounted for half of Irish exports in November, with €5.5 billion of goods transported to other member states.

€1.6 billion of this was exported to Great Britain, and €1.3 billion to Belgium.

The USA was the main non-EU destination, accounting for €2.9 billion of total exports in November.

Irish exports to the EU rose by 2% annually in November, while non-EU exports were 14% higher.

With regard to imports, 55% or €3.6 billion came from the EU, with €1.4 billion of that accounted for by Great Britain. Imports from the EU decreased by 6% in November compared with November 2015, while non-EU imports increased by 23% over the same period.