The move is part of a deepening role for the bank in financing infrastructure and lending to small enterprises here.

European Investment Bank President Werner Hoyer has said the bank is negotiating a deal worth several hundred millions of euro to invest in a large house-building project in Ireland.

Speaking to RTÉ News, he said he hoped the deal would see thousands of units built in Dublin and other parts of Ireland, saying the bank is aware of the housing crisis in Ireland.

EIB plans to spend an overall €1 billion on various investment projects in Ireland next year pic.twitter.com/fm2wKqGsLl

He said the EIB planned to spend an overall €1 billion on various investment projects in Ireland next year.

The EIB is owned by the EU member states with a mandate to provide financial support for EU policies.

It has lent €15bn to Ireland since 1973 for a range of projects including school and university building, Terminal Two at Dublin airport, Luas trams and rural broadband.

The bank's president is in Dublin to open a permanent office here, to raise the bank's profile and provide a one stop shop for project promoters seeking finance.

In particular it will be the gateway for funding from the "Junker plan", a  €300bn public private investment stimulus programme that EU finance ministers agreed to expand to €500bn earlier this week.

Taoiseach @EndaKennyTD speaking at the official opening of @EIB's office in Ireland pic.twitter.com/e7rFUrfdIO

Speaking on RTÉ's Morning Ireland, Mr Hoyer said the opening of a new branch of the bank in Dublin marks a new chapter where the bank is moving closer to its clients.

Investing in Irish Water, he said, is a worthwhile economic approach and said the EIB is confident it would get back any money it lent.

He said the EIB is financed at "such fantastic rates" that it can offer very favourable loans at a long tenure - almost as favourable as a grant - but must be repaid.

The bank is setting up a co-ordination group with the Irish Government to give an additional push to funding projects for the public sector, with a long history of investing in education, research and infrastructure.

Ireland has enormous per capita investment from the EIB, he said.

He said the ECB has "bought time" for many countries after the economic crisis, adding that Ireland has done a great job in making a recovery.

Mr Hoyer is to take part in a meeting of a high level EIB-Ireland financing group, chaired by the Minister for Finance, that has been set up to encourage a strong pipeline of Irish projects that could attract EIB funding and technical assistance.

Meanwhile, the Royal College of Surgeons in Ireland and the European Investment Bank signed a €50m loan deal for a significant investment towards RCSI's new education building on York Street in Dublin city centre this morning. 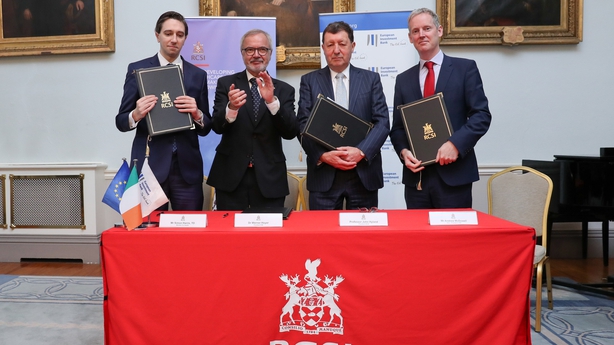 The new building on York Street is currently under construction and will allow early clinical education to be delivered away from the patient's bedside.

It also includes a 540 seat auditorium, a library spanning three floors with 500 study spaces, a sports hall and fitness suite.

The project was started in October 2014 and will open to students and staff at the start of the 2017/2018 academic year.

There will also be an upgrade to the college's main Dublin campus including expanded education, laboratory and research facilities, and enhanced ICT facilities.

"This investment by the European Investment Bank is a sign of confidence in Ireland as a leader in medical education and research with this new development forming the focus of RCSI training facilities in Dublin as part of Ireland’s only specialist health sciences higher education institution," commented Professor Cathal Kelly, CEO/Registrar RCSI.