European stock markets were mixed by closing as a choppy trading week triggered by Donald Trump's election win comes to a close.

Shares on London's FTSE ended the day 1.4% lower, while Paris markets were down 0.9%. In Dublin the ISEQ also closed in negative territory - down 0.2%. But it was a different story in Frankfurt, where shares ended 0.4% higher.

MSCI's broadest index of Asia-Pacific shares outside Japan fell 1.4% as US bond yields continued to soar on views that Trump's spending plans will push up inflation.

This could trigger more aggressive rate hikes by the Federal Reserve.

Emerging markets bore the brunt of selling, with MSCI emerging market index falling 1.5% to its lowest level since July, with Indonesia and Malaysia hit the hardest in Asia.

But Japan's Nikkei bucked the trend, rising more than 1% to six and a half month highs the yen weakened against the firming dollar.

The Dow had hit an all-time high last night, as investors reacted jubilantly to news of Trump's clinching the US presidency. However the Nasdaq, tied in large measure to the fortunes of Silicon Valley, moved 0.8% lower.

"The market's focus has shifted to Trump's policy after the initial knee-jerk risk-off reaction. The markets think he is likely to protect the US domestic economy, especially the old economy," an analyst at Standard Chartered Bank said.

The financial sector surged 3.7% to its highest since the 2008 global financial crisis, as Trump has sided with leading conservatives in calling for the repeal of the 2010 Dodd-Frank Financial Reform Act largely opposed by banks.

US bond markets have also seen dramatic moves since Trump's victory, with the 10-year US Treasury yield hitting its highest levels in 10 months.

Expectations that his policy stance - from protectionism and fiscal expansion - will boost inflation have been driving the surge in US yields.

The dollar strengthened sharply against the yen, which has traditionally a strong inverse correlation with US yields because higher US yields encourage Japanese investors to buy more US debt.

Emerging market currencies were hammered by concerns investors could pull back their funds out of higher-yielding emerging assets and move them back to the US.

The Mexican peso has fallen 7.5% so far this week, hit by Trump's threat to scrap the country's key free trade agreement with the US and build a massive wall along the border. 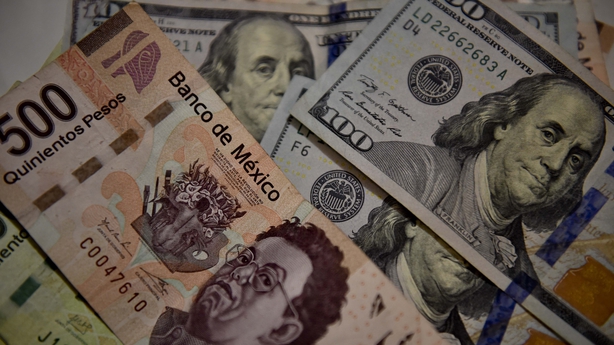 The Brazilian real shed 5% yesterday to a five-month low, while its benchmark Bovespa stock index slumped 3.3%.

The South Korean won fell to its lowest level in morethan four months on the dollar's strength and concerns aboutTrump's foreign policy and his commitment to security in East Asia.

Markets are expecting the US Federal Reserve to go ahead with a rate hike in December after US markets quickly stabilised from the initial Trump election shock. The money market futures are pricing in about a 75% chance of a rate hike.

In a remarkable shift of sentiment, the market is also now starting to price in a chance of a rate hike by the European Central Bank for the first time since 2011.

Debt yields are rising in Europe as well, with 10-year German Bunds yield hitting an eight-month high of 0.32%.