Euro zone finance ministers have given Greece a positive review of its reforms but divided up the latest tranche of aid to Athens.

It disbursed a €1.1 billion loan but postponed its decision on a further €1.7 billion payout to later in October.

As part of an €86 billion bailout programme agreed last year with other euro zone members, the third such package since 2010, Greece needs to complete a wide range of reforms on pensions and labour markets, carry out privatisations and tackle other sensitive issues.

Euro zone countries have so far disbursed €33.5 billion under the third bailout and were expected to release a further tranche of €2.8 billion to conclude the first review of the aid programme.

But in a meeting in Luxembourg yesterday, euro zone finance ministers decided to split the payment in two parts and gave their political green light only to a €1.1 billion payment.

The release of the remaining €1.7 billion will depend on data on arrears payments for September that the Greek authorities are in the process of collecting.

"It takes time," to collect this data, the chairman of the Eurogroup of euro zone finance ministers Jeroen Dijsselbloem told a news conference after the meeting.

But he added that "we are fully confident that it will be fine."

The actual disbursement of the €1.1 billion sub-tranche will be finalised in two weeks, on October 24 or 25, when the board of directors of the euro zone bailout fund, the European Stability Mechanism, is to meet.

"We could do it earlier but there is no need to do it earlier," ESM head Klaus Regling told the news conference.

At the meeting, the ESM should also decide on the disbursement of the remaining €1.7 billion after data on arrears is available, 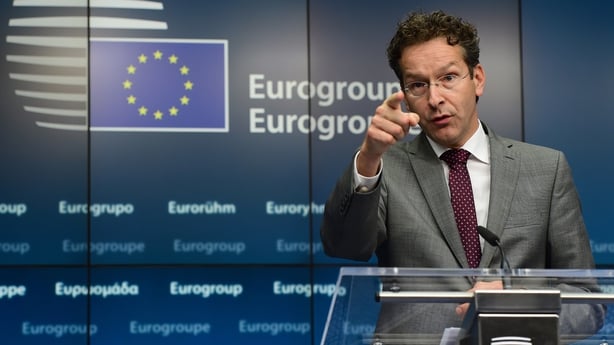 To get the money, Greece was supposed to take 15 reform actions, called milestones, the last of which were completed over the weekend.

The institutions assessing the reforms are the European Commission, the European Central Bank, the euro zone bailout fund ESM and the International Monetary Fund.

"All remaining milestones have been completed," European Commissioner for Economic and Financial Affairs Pierre Moscovici said.

But a compromise was reached on pushing back full implementation of the milestones to the second review of the programme, the next stage of the reform process.

Moscovici said that a team of European Commission experts will go to Athens in the second half of October to start talks on the second review, the completion of which is a condition for the start of talks on the scope of Greek debt relief.

The second review will focus on the reform of the Greek labour market, EU officials said.

If Athens completes all the actions from the second reform review by the end of the year, it could begin negotiations on the terms of medium to long-term debt relief from the euro zone an important political victory for the government.

Euro zone finance ministers agreed in May to start discussing the scope of such debt relief, to be delivered only in 2018, once a new debt sustainability analysis for Greece is prepared by the IMF in December.

Euro zone ministers agreed in May that the guiding principle for debt relief, once all reforms are delivered, would be to cap Greece's gross financing needs at 15% of GDP in the medium term and at below 20% in the long run.