Between January and July the number of motor claims involving uninsured or untraced drivers shot up by 17%, according to new figures from the Motor Insurers' Bureau of Ireland.

In the first seven months of the year there were 1,644 claims in these categories nationwide, with the increase representing 235 more claims when compared with the same period in 2015.

The largest number of claims was in Dublin, which accounted for 42% of all uninsured or untraced driver claims.

The capital also saw the largest increase in the number of claims in general, with 78 more made this year compared with the corresponding months last year.

The counties with the next highest number of claims were Cork (129) and Galway (92).

Over the first seven months of the year, claims increased in 20 counties in total, with the largest percentage change being in Roscommon, which recorded an increase of 500% as the number of claims rose from two to 12. 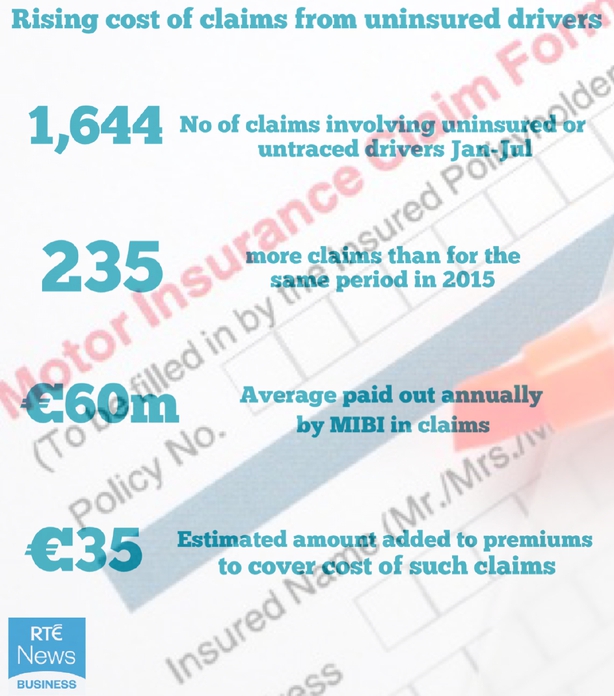 According to the MIBI, four counties experienced a decline in the number of claims, the largest drop being in Limerick which had 80 claims, down from 95 in 2015.

The largest percentage decline was in Waterford, with the number of claims falling from 29 to 21 – a decrease of 28%.

The MIBI is an organisation set up in 1955 by agreement with government to compensate victims of accidents involving uninsured or unidentified vehicles.

Its costs are paid for by insurers and reflect the premiums paid by consumers.

On average it pays out €60m a year. The MIBI estimates this equates to €35 on the average motor insurance premium.

Commenting on the figures, MIBI Chief Executive David Fitzgerald said: “An increase of 17% represents a significant jump in the number of claims being lodged.

“It showcases the increased pipeline of payments facing the MIBI.

“While no sums are yet attached to these claims, unfortunately more claims generally means higher levels of payments coming from the MIBI and ultimately, that will impact on motor insurance premiums.”