Both consumer and business sentiment have improved here in August, after dipping in the immediate aftermath of July's Brexit vote, according to a new survey.

The latest Bank of Ireland Economic Pulse – which combines measures of confidence within industry and among consumers – rose by 2.5 points in August to stand at 93.7.

Retail and construction firms were among those expressing greater confidence in August, with both sectors benefiting from the weaker pound – which means lower input costs.

However, the study shows only a quarter of the ground lost in July after the UK’s decision to leave the European Union has been recovered 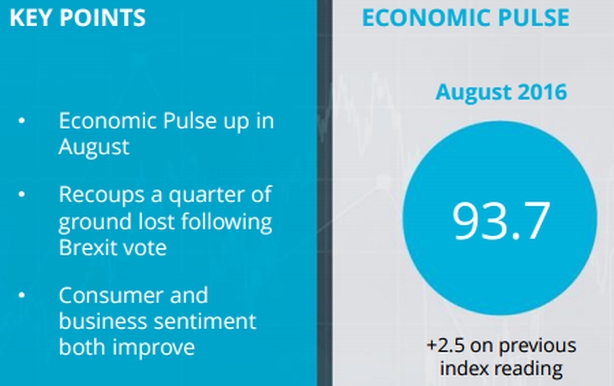 The lender’s Chief Economist, Dr Loretta O’Sullivan, said “many consumers and businesses are still assessing the potential impact of Brexit”.

Among consumers, the outlook for the economy and employment improved as 50% of consumers now expect the general economic situation to improve over the next 12 months.

Buying sentiment also increased slightly in August, with 34% of consumers considering it a good time to purchase big-ticket items such as furniture and electrical goods (the July figure was 32%).

According to the BoI survey, house price expectations in August remain in positive territory, with two out of three survey respondents anticipating increases over the next 12 months.

Dublin continues to lead the way with 74% expecting price gains, compared with 64% in the Rest of Leinster, 70% in Munster and 54% in Connacht/Ulster.

Ms O’Sullivan said: “Rents are now back above their previous peak and the widespread expectation is that they will rise further over the next 12 months. House price expectations remained in positive territory in August.

On the business front, the BoI industry and retail pulses saw the largest increases in August (+7.7 and +6.1), while construction was also up.

Though, sentiment among service firms was down very slightly.

The August findings indicate the majority of firms do not expect to change their selling prices in the near term, and also point to some easing in input costs, excluding labour costs, in the industry and retail sectors over the past three months.

Ms O’ Sullivan said industry “put in a strong performance this month, particularly medium/larger firms, while the retail and construction pulses recovered some of the very steep losses sustained in July.

“In contrast, the Services Pulse saw a slight softening in the month. While the fall in sterling is a headwind for exporters, the August data show an easing in input costs in the industry and retail sectors as the weaker pound feeds through to lower import prices.”

Meanwhile – according to the Bank of Ireland research – on a regional level households in Dublin, the Rest of Leinster and Munster were more positive about the outlook for the economy in August than they were in July. 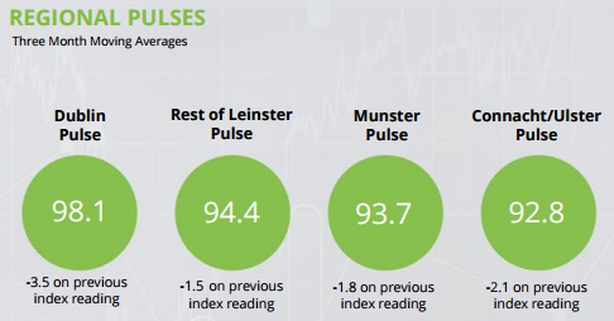 More than half of Dublin households expect to see an improvement in the general economic situation over the next 12 months, with the same proportion (52%) in the Rest of Leinster, 47% in Connacht/Ulster and 47% in Munster.

Expectations for near term business activity were also up on July in each of the four regions.