The Low Pay Commission recommendation of a 10 cent increase in the national minimum wage to €9.25 an hour has been described as paltry, ill-judged, wholly inadequate and a missed opportunity - by one of its own members.

In a minority dissenting report, the Director of the Migrant Rights Centre of Ireland Edel McGinley said she would have advocated an increase to €10 per hour - in light of Ireland's positive growth and economic performance.

She said the failure to increase the minimum wage in this context was a lost opportunity which could have been utilised to make s significant  change for low waged workers.

She said it was important that wages are front-loaded in the current economic acceleration phase, so that they can keep pace with a growing economy, inflation, consumer spending and to take account of increasing profits - particularly in sectors where low wage workers are employed.

Ms McGinley said using Brexit as a rationale to limit minimum wage increases without any evidence or empirically testable projections was highly unsatisfactory and not fact-based.

She also alleged that the Commission had not taken into account "firm affordability" or profitability in sectors employing low wage workers. She noted that there had been no "inability to pay" applications from employers.

She said an inadequate increase in pay at the lower end does not tackle the incidence of low pay in Ireland, and does a disservice to the testimonies and concerns of minimum wage workers.

The Cabinet today considered the proposals.

The minimum wage rise of 1.09% is ahead of inflation, which is currently running at 0.4%.

The current Programme for Government made a commitment to increase the minimum wage to €10.50 by 2020.

However, if the proposed rate of increase were applied in the coming years, it would take almost 13 years to meet the Government target. 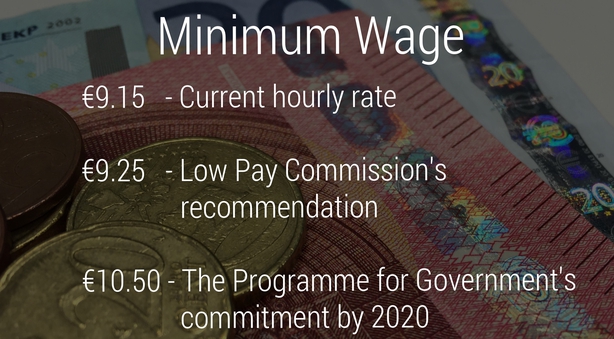 Asked about a 10-cent increase, Government sources noted the Low Pay Commission report constitutes recommendations, but that the ultimate outcome would be a matter for the Budget.

They also acknowledged the British exit from Europe will influence thinking on all budgetary matters.

The Minister for Jobs Enterprise and Innovation Mary Mitchell O'Connor said the LPC proposals on the minimum wage will be considered in detail in the context of Budget 2017.

She noted that the commission is "balanced and non-political" and is tasked with carrying out an evidence-based assessment, taking into account issues such as impacts on job creation and competitiveness.

The commission examined a range of social, economic and labour market issues, including changes in earnings since the minimum wage was last increased, the general unemployment and employment rates,     the expected impact of a change to the minimum wage on employment, the cost of living and national competitiveness, changes in income distribution and currency exchange rates.

The scale of the increase will bitterly disappoint unions and groups dealing with low paid workers, who say no one should earn less than a living wage of €11.50 per hour.

If the same rise were applied each year, it would take over 20 years to attain the union living wage aspiration.

The Small Firms Association has condemned the Low Pay Commission’s recommendation of an increase in the minimum wage.

SFA Acting Director Linda Barry said: “There is no justification for any increase in the National Minimum Wage at this time.

"Small firms, many of which have yet to feel the economic recovery, have been further destabilised by Brexit. On behalf of the small business community, the SFA calls on the Government to reject the increase proposed by the Low Pay Commission,” she added.

Chief Executive of Chambers Ireland Ian Talbot said: "Locking in another increase to the National Minimum Wage at a time of such uncertainty around the future performance of our economy will put more pressure on our business community and further erode our competitiveness."

Meanwhile employers' group Ibec said the proposed increase would heap additional pressure on "vulnerable sectors already reeling from the sharp drop in the value of sterling".

The commission's report will contain at least one hard-hitting minority report from trade union representatives voicing disappointment at the small scale of the increase.

During the recession, Fianna Fáil cut the minimum wage from €8.65 an hour to €7.65 per hour - but it was restored to €8.65 by the last Fine Gael/Labour government.

Around 4.4% of the workforce earns the minimum wage.