Taoiseach Enda Kenny has admitted official figures from the Central Statistics Office for the economy are inaccurate.

As experts lined up to dismiss a claimed 26% surge in GDP growth last year, the Taoiseach said the numbers can be exaggerated.

"They don't reflect accurately what is happening in the Irish economy," he told the Dáil.

But he said the latest CSO figures were unprecedented and down to a number of "exceptional" factors during 2015.

Mr Kenny said the relocation of multinationals to Ireland, aircraft leasing and developments in the manufacturing sector last year skewed the latest data.

He added that while the headline figures can be exaggerated in an Irish context, other indicators like consumer spending, the rise in employment and taxation receipts confirm that there is a strong recovery rooted in domestic demand.

Mr Kenny said these figures pre-date the Brexit decision and the drop in sterling and while it is an unprecedented figure, you could not make policy based decisions on them.

Analysts have suggested a better system for gauging the economy is needed to allow the Government to best plan how it spends public money and impose taxes.

Concerns have also been raised about Ireland's international reputation regarding widely-derided official figures.

Fianna Fáil leader Micheál Martin said the official economic growth rate does not reflect what is happening to real people around the country.

"Nobody believes the figures," he said pointing to comments from economist Paul Krugman and Central Bank CEO Philip Lane. 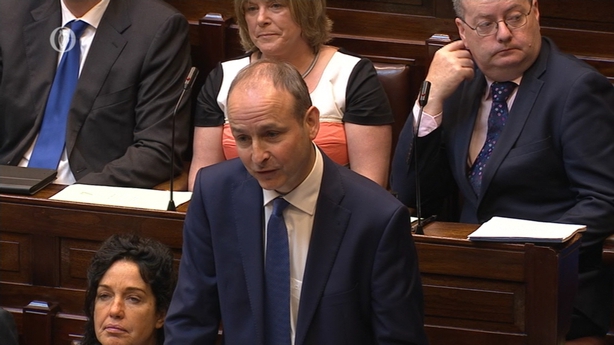 He pointed to the ESRI report on quality of life issues and the Credit Union survey on the difficulties families face going back to school.

He said comparing the CSO figures on the staggering growth, you see a disconnect between the reality on the ground.

Mr Martin said the figures were not a bolt from the blue and there was not the ability to collect data on the economy.

Citing comparisons to Soviet Russia and China, Mr Martin called for a new system to be devised that better reflected what is actually happening in the country.

The Fianna Fáil leader said “no one in their right mind believes Irish statistics... this needs urgent addressing”.

The Taoiseach added the Department of Finance would base its assessment on the more normal growth rate of 3.5%.

Meaningless economic statistics may cause problems