Global investors are expected to pull $538 billion (€476 billion) out of China's slowing economy in 2016, the Institute of International Finance has estimated, although the pace of outflows has dropped.

That number would be down a fifth from the $674 billion (€600billion) pulled out last year, the industry association said, but could accelerate again if fears re-emerge of a "disorderly" drop in the yuan, or the renminbi, as the currency is also known.

Capital exodus from China is crucial for emerging markets more generally, partly because of its sheer size and partly because sustained outflows can trigger more exchange rate volatility, which would then feed a fresh wave outflows.

"A sharp drop in the renminbi would likely spark a renewed sell-off of global risk assets and trigger a flight of portfolio capital from emerging markets," the IIF said in a new report.

"Moreover, a sharp depreciation of the renminbi could lead to a round of competitive devaluation in other emerging markets, particularly in those with close trade linkages to China."

For now, though, outflows are slowing. Roughly $35 billion (€31 billion) was pulled out in March, bringing the total since the start of the year to around $175 billion (€155 billion), well below the pace seen in the second half 2016.

The IIF cited progress Chinese authorities had made in easing worries about the yuan's direction. They had emphasised there is more focus on its value against a basket of currencies, rather than just the US dollar.

One "important unknown" however is the threshold of currency reserves below which Chinese authorities would start to worry.

They might then either allow the yuan to fall again or markedly tighten capital controls.

But using another calculation, developed by the IMF, the cushion between actual reserves and what could be required, has dropped to 15% from 50% just under two years ago.

"From this perspective, continued large capital outflows could lower the country's official reserves to a level that is regarded as inadequate without a serious tightening of capital controls," the IIF said. 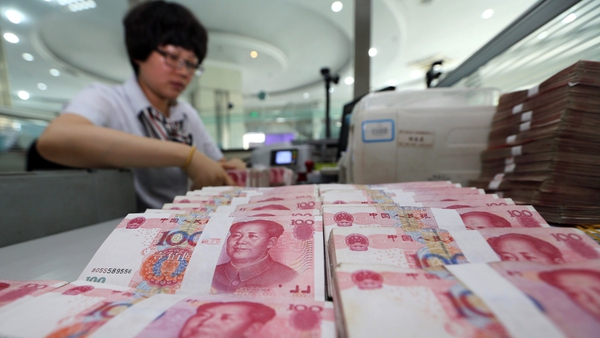