The industry posted a figure of 62.3 last month - well above the 50 mark that separates growth from contraction - but below the all time high of 68.8 seen in February.

Construction activity has now increased in each of the past 31 months, with a rising number of enquiries reported by builders during the month.

Building firms continued to report solid flows of new business, while a rise in tender opportunities and optimism about the year ahead has encouraged companies to continue to hire more staff.

The latest PMI shows that the rate of growth each of the three monitored categories - housing, commercial and civil engineering - all eased in the month.

The fastest expansion in activity was on commercial projects, followed by house building. Civil engineering remained the slowest growing category, although the rate of expansion was still marked.

Today's index showed that new orders continued to rise at a sharp pace in March, which in turn resulted in companies further increasing their staffing levels.

Ulster Bank noted that the rate of job creation was the slowest so far this year, but still remained "sharp". Employment has risen every month since September 2013. 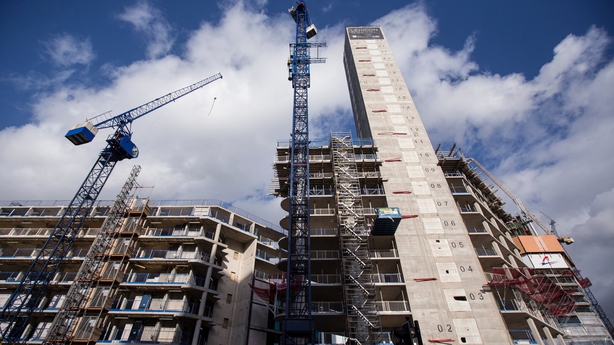 Construction companies also upped their purchasing activity at a "substantial" pace last month, with the rate of growth among the fastest in the history of the survey.

Companies remained strong optimistic that activity will continue to rise further over the coming year, despite sentiment easing to a five month low, Ulster Bank added.

"Over 60% of firms anticipate further improvement over the next 12 months, partly reflecting positive expectations regarding the outlook for the wider Irish economy," noted Ulster Bank's chief economist Simon Barry.

MR Barry said that some pull-back had been expected from February's all time survey high.

"At 62.3, the headline PMI index continues to point to very strong expansion. It's a similar story at the level of each of the major sub-sectors, with growth easing but remaining robust in the commercial, housing and civil engineering areas," he added.