Latest figures released by the Central Statistics Office show a record seasonally-adjusted trade surplus of €4.98bn for January, representing an increase of €1.1bn on the December 2015 figure.

The surplus for January exceeded the previous all-time high surplus of €4.69bn, which was recorded in August 2012.

Last year’s surplus was the largest on record and the first positive rise since 2010. 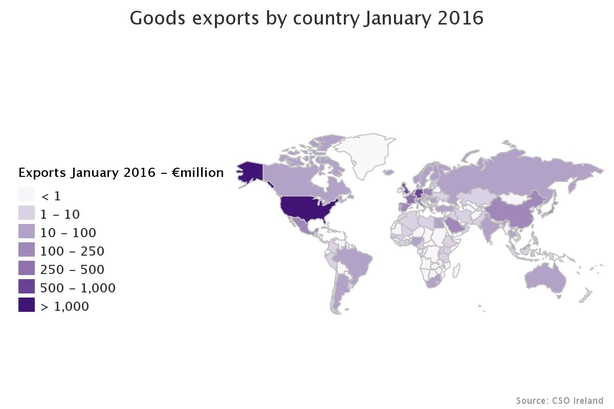 Meanwhile, the USA was the main non-EU destination, accounting for €2.24bn (25%) of total exports in January. 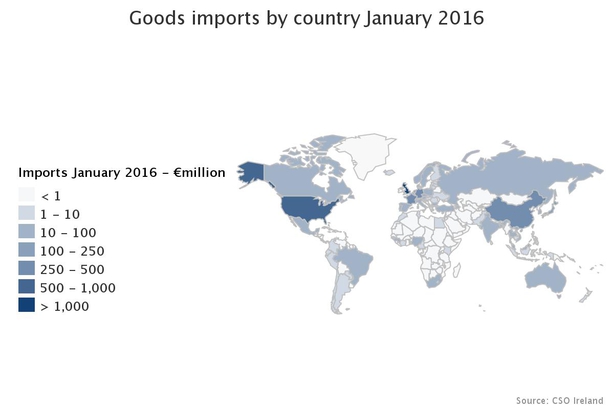 Exports of medical and pharmaceutical products increased by €376m (+18.3%), while exports of office machines and automatic data processing machines rose by €232m (+78.1%).

Commenting on the CSO trade figures, Alan McQuaid from Merrion Economics said: “There was very strong growth in Irish merchandise exports in 2015, and we think 2016 will see another robust performance.

“But imports also recorded a healthy rise last year, and despite the disappointing start to 2016, we see them posting strong growth this year.

“This in turn reflects to some degree the pick-up in consumer confidence to 15-year highs and increased personal consumption as a result.

“Ireland’s trade performance in 2015 benefitted from competitiveness gains made against its main partners and by the weakening of the euro, particularly against sterling and the dollar.

“Against a difficult global backdrop, the strength of the US and UK economies was clearly a factor here.

“However, with sterling starting to weaken against the euro on ‘Brexit’ fears and a less favourable Bank of England interest-rate outlook, that could weigh negatively on Irish exports to the UK in 2016,” Mr McQuaid added.