It cut all three of its interest rates and expanding asset-buying to boost the economy and prevent ultra-low inflation becoming entrenched.

In moves that initially pushed the euro 1% down against the dollar before recovering, the ECB cut its deposit rate deeper into negative territory and increased monthly asset buys to €80 billon from €60 billion.

This was above market expectations of an increase to €70 billion.

While the deposit rate was cut 10 basis points to 0.4%, the main refinancing rate was reduced to zero from 0.05% and its marginal lending rate – used by banks to borrow from the ECB overnight – fell to 0.25% from 0.3%.

Hoping to boost lending, consumption and inflation, the ECB said it would also start buying corporate debt and launch four new rounds of cheap loan packages, to be extended by banks to the real economy. 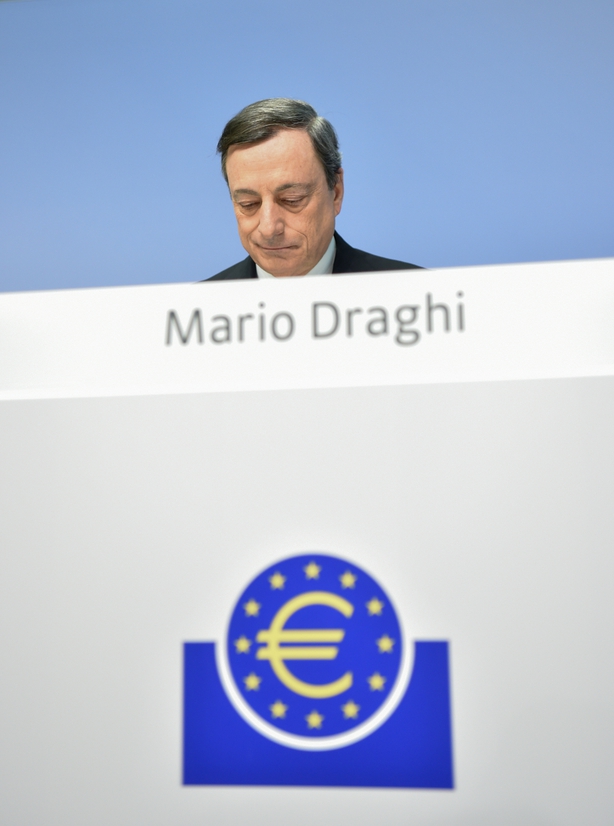 The ECB said further rounds of ultra-cheap four-year loans to banks would in some cases include extra financial sweeteners for them to take up the offer to pass on to others.

"A bank that is very active in granting loans to the real economy can borrow more than a bank that concentrates on other activities," ECB President Mario Draghi said.

Mr Draghi, judged to have disappointed markets in December with stimulus measures below expectations, said more action was needed because the euro zone recovery risked being dampened by the slowdown in emerging markets.

"With today's comprehensive package of monetary policy decisions, we are providing substantial monetary stimulus to counteract heightened risks to the ECB's price-stability objective," he told a news conference.

"The Governing Council expects key interest rates to remain at the present or lower levels for an extended period of time, and well past the horizon of our net asset purchases," he added, forecasting that inflation would remain negative in the coming months and pick up later this year.

Mr Draghi said, however, that there were limits to how far rates could fall.

"The bottom line ... is that basically more and more the emphasis will shift from rates instruments to other non-conventional instruments," Mr Draghi said.

Meanwhile, the euro zone economy is expected to expand at a slower pace in the next two years than earlier forecast, the European Central Bank said today, while also sharply lowering its inflation prediction for 2016.

Inflation was meanwhile expected to come in at just 0.1% in 2016, far below the 1% previously predicted.

"Good news for Europe: Having delivered less than expected in December, the ECB returned to its usual form today and eased policy by a bit more than projected," said Holger Schmieding at Berenberg bank.

But others were more critical, warning that such loose monetary policy risked creating asset price bubbles and removed any incentive for governments to reform their economies.

"What will happen if the global economic situation deteriorates sharply once more, requiring a strong monetary policy response? I do not anticipate this happening, but if it did, the ECB would have already shot most of its powder," said Michael Menhart, chief economist at German reinsurer Munich Re.

The ECB has little to show for the €700 billion it has spent buying government bonds and other assets in the past year, as tumbling raw materials prices blunt the impact of its quantitative easing.

That raises the risk that people will lose faith in the bank's commitment to its mandate. Inflation has been below nearly 2% target for three years and is likely to remain so for many more.

The ECB's move came after the G20 group of the world's major economies last month agreed they need to look beyond ultra-low interest rates and printing money to shake the global economy out of its torpor.

The US Federal Reserve, the Bank of Japan, Bank of England, and Swiss National Bank are all set to meet next week.