The widely predicted failure of G20 leaders to agree on bold new steps to reinvigorate the world economy at a meeting in Shanghai this weekend puts the onus back on central bankers.

But after years of attempts to kick-start growth there is fear among bankers and officials that monetary policy is running out of effective ammunition and future stimulus efforts could even be harmful.

"Monetary policy is extremely accommodative to the point that it may even be counterproductive in terms of negative side effects on banks, policies and growth," German Finance Minister Wolfgang Schaeuble said at the G20 meeting.

"Fiscal as well as monetary policies have reached their limits," he said. "If you want the real economy to grow, there are no shortcuts which avoid reforms."

The G20 acknowledged that monetary policy alone is not enough to combat rising global risks but leaders failed to outline concrete steps, making only vague and general pledges.

Facing a new paradigm of slow growth and the legacy of crises, top central banks have kept rates near or below zero for years, waiting in vain for governments to embrace reforms instead of pointing the finger at monetary policy.

The Bank of Japan and the ECB both followed suit but the results have been mixed, with side effects. 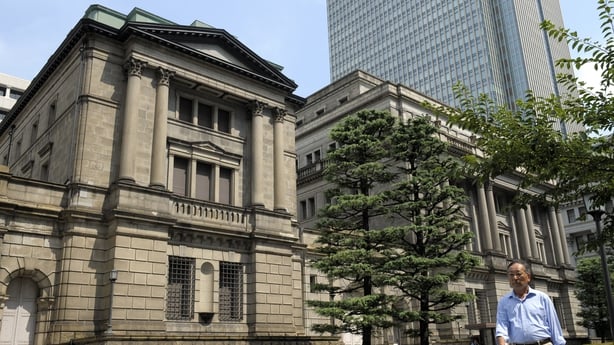 "Some things may be technically possible, but it's a different question when it comes to whether they are feasible," BOJ board members Takahide Kiuchi.

"The reality in Japan is that it's gradually becoming difficult to come up with policy steps for which the merits sufficiently outweigh the costs," Kiuchi said, suggesting that the BOJ may have exhausted its options when it cut its key rate to below zero last month.

Although the rate cut pushed bond yields into negative territory, it failed to lift stock prices or stop an unwelcome rise in the yen, meaning that policy is not achieving its goals.

In the world of such unconventional monetary policies, the law of diminishing returns apply, so each new measure yields less but carries a greater risk.

With China, Japan, the ECB and Switzerland all seeking a weaker exchange rate, banks are facing the risk of an open currency war, losing their ability to boost prices and competitiveness through devaluation.

"Central banks should rethink their strategy," said Michael Heise, chief economist of Allianz, an insurer and one of the world's biggest investors.

"The power of the central banks is limited. We have been over reliant on central banks to fix the problem but it is not under their control," he added.

Indeed, this time many of the shocks are external, such as slowing emerging market growth and deflationary pressures from low oil prices.

These shocks are difficult to counter and weak PMI and confidence indicators in Europe suggest that growth is already taking a hit, despite a €1.5 trillion stimulus programme from the ECB. Help could come from fiscal spending but the G20 meeting highlighted that few governments have room to manoeuvre and the those which could spend more, such as Germany, made it clear they are not going to.

That leaves central banks stuck with a need to act and the ECB is almost certain to ease policy on March 10, delivering a small rate cut and a few changes to its assets buys, moves well short of a quantum leap.

Still, if a global crisis flared up again, central banks still have a few powerful, though controversial and potentially illegal tools left.

Economists say that central banks could force commercial lenders to offer loans at a negative interest rate in return for guaranteed earnings, stimulating both growth and investment. That would force central banks to take big losses.

They say a last resort would be to offer "helicopter money", free cash provided to all euro zone citizens with the aim of stimulating spending and inflation.

This was suggested by former Fed chairman Ben Bernanke in 2002 as an effective way to fight deflation but European policymakers have not seriously discussed the idea.

It would face fierce resistance from conservative countries like Germany, where even asset purchases have been challenged in court, likely leading to years of legal and political challenges.

It would also be questionable as domestic demand in the euro area is holding up well and cheap central bank money is already providing liquidity.