The Indonesian government will appeal a court's rejection of a $565 million lawsuit against a pulp and paper company accused of failing to prevent fires that blanketed Southeast Asia in toxic haze.

The court on Sumatra island dismissed the civil suit brought by authorities against Bumi Mekar Hijau, a supplier to global giant Asia Pulp and Paper, over fires on plantation land in 2014, saying there was insufficient evidence.

The haze-belching fires occur every year as land is cleared using slash-and-burn methods to make way for palm oil and pulp and paper plantations on Sumatra and the Indonesian part of Borneo island.

The damages would have been the biggest ever levied against a firm over such burning activities in Indonesia, and environmentalists said the rejection was a major setback in efforts to take on those behind the annual haze outbreaks.

Environment ministry spokesman Eka Widodo Sugiri said the government would file an appeal against the court's decision within two weeks.

Plantation companies are responsible for ensuring fires do not break out on their land, but blazes still occur frequently.

Major firms have "zero-burn" policies and typically insist fires inside their concessions start outside before spreading in, and are started by people not working for them.

The company is also being investigated over this year's fires, with its operations frozen in December. 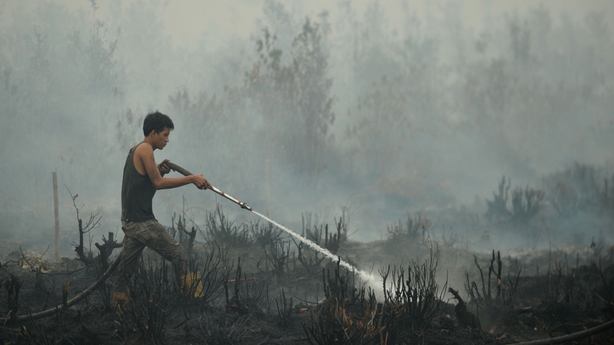 The 2015 blazes, which occurred mainly in September and October, were the worst for years, prompting thousands to fall ill, and leading to flight cancellations and school closures across the region.

Bumi Mekar Hijau was one of 20 firms who were punished in an unprecedented move over the blazes.

Activist Riko Kurniawan, from The Indonesian Forum for the Environment, said the lawsuit rejection set a "bad precedent".

"We really regret the decision of the judges who rejected the lawsuit, it is another failed attempt to seek justice for victims of the haze," he said.

The haze crisis also caused huge damage to the Indonesian economy, with the World Bank estimating the cost at $16 billion -- more than double the sum spent on rebuilding Aceh province after the devastating 2004 tsunami.