Irish consumers were expected to spend over €100 million online and in store today on so-called Black Friday bargains.

It is the biggest shopping day of the year in the United States after the Thanksgiving holiday which has become something of a phenomenon in Ireland as well.

Much of the spend will be online between now and Cyber Monday, generally the biggest day for e-commerce in the US.

But the IE domain registry, the body responsible for the management and administration of Ireland's official internet address .ie, says many Irish small and medium enterprises will miss out.

Its "IE Digital Health Index" shows that only 35% of SMEs have a website that can process payments online and only two in five can take sales orders online.

The registry says than only 14% of Irish SMEs plan to conduct any online special offers and promotions for Black Friday and the Christmas season.

It is estimated that over €100 million will be spent in Ireland during Black Friday, up a third on last year. 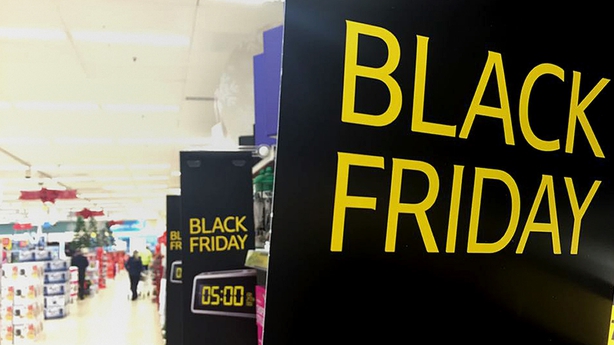 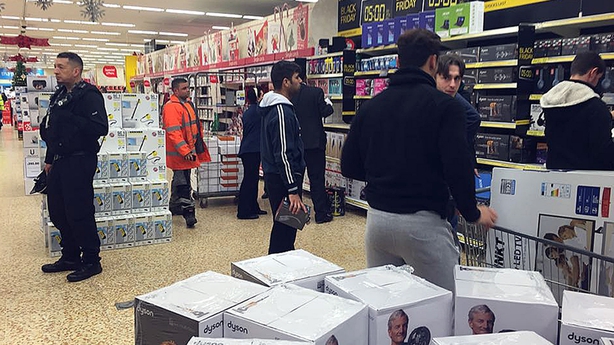 In Britain, police were on hand this morning and security barriers had been erected but the predicted chaos of Black Friday failed to materialise as smaller crowds waited patiently to get a deal.

Last year's scenes of bargain-hunters wrestling over cut-price televisions were not repeated in the early hours.

However, the shoppers who did turn up were seen loading up their trolleys with high-value items including TVs, coffee machines and vacuum cleaners.

Stores had taken extra precautions this year, after warnings from police that firms needed to ensure they had enough security staff on duty in case of any trouble.

Elsewhere, retailers across the US offered early Black Friday discounts to lure bargain-hunters on Thanksgiving eve, but crowds were subdued in stores even as online sales jumped.

Shoppers in the US spent more than $1 billion online yesterday, 22% more than last year, according to the Adobe Digital Index.

As much as 20% of holiday shopping is expected to be done over the Thanksgiving weekend this year, analysts said.

The four-day shopping burst will help set the tone for the rest of the season in the US, signaling to retailers whether they need to drop prices or change promotions.