Europe's ageing society needs immigrants to keep its workforce from shrinking further, the vice president of the European Central Bank has told Reuters.

In a wide-ranging interview with the news agency, Vitor Constancio underlined the ECB's willingness to print more money.

He pointed out that the ECB had bought significantly less than peers in the US, Japan or the UK.

But he cautioned that while the ECB could extend money-printing, expectations that the central bank could single-handedly turn around the euro zone's economy were unrealistic.

Immigration, he said, could help.

Constancio addressed one of the factors slowing the region's economy, namely an ageing society and shrinking workforce that is set to reduce further in the coming decades.

"This is a very acute problem because for years Europe has been doing a sort of collective demographic suicide," said the former politician from Portugal, one of the countries worst hit by the downturn.

"To change the demographic trends, promoting birth is not enough. It also has to be done through immigration. If not, we're creating a great difficulty to growth and to the welfare of future generations," Constancio said.

He said the European Central Bank has scope to expand its efforts to stimulate the economy through quantitative easing, but Europe also needs the US and Chinese economies to grow strongly.

The ECB vice president warned that Europe's economic growth potential was weak, due to factors including a shrinking labour market. Monetary policy is powerless in this respect.

The frank remarks come as people fleeing war flood into Europe from areas such as Syria and Afghanistan along with migrants seeking work, stoking tensions between European Union countries over how to manage or try to deter the influx. 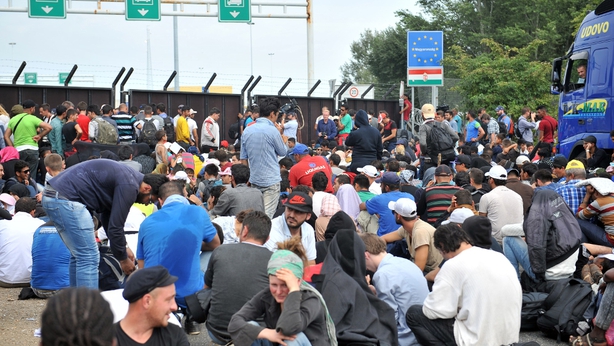 Germany has re-established border controls, stopping a system of passport-free travel across the region, while Hungary is closing down its border with Serbia, blocking a main route into the bloc.

European Union ministers failed on Monday to break a deadlock over sharing out responsibility for sheltering some of the hundreds of thousands of people who have sought asylum in Europe this year, leaving the shape of any such deal in doubt.

Constancio, formerly Portugal's finance minister, blamed high unemployment for a "dramatic backlash" against immigration and said that the large number of unemployed people in Europe was "destabilising the continent".

The euro area population rose just 0.25% last year with seven of 19 nations recording a drop. In contrast, the US population rose by 0.75%, while Australia, which has not had a recession since 1991, recorded a 1.4% rise.

Unemployment across the euro zone remains high but there are large differences between countries such as Greece or Spain, which are still struggling after the debt crisis, and stronger states including Germany.

While the number of those employed in Spain fell in the five years to 2014 by about 1.8 million and also dropped across the euro zone, according to European Union statistics, Germany's workforce increased by about 1.4 million.

Immigration reflects this trend with the numbers moving to Spain falling in the run up to 2013, while almost 700,000 moved to Germany in the same year - roughly twice the level in 2009.

"The unemployment rate in Europe is a very high 11%, which is destabilising the continent," Constancio said.

"European values are being eroded as a result of the fear that unemployment creates," he added.