The economy grew by just under 2% in the second quarter of this year, according to the latest figures from the Central Statistics Office.

Today's Quarterly National Accounts figures show that both GDP and GNP grew by 1.9% in the three months to the end of June.

Compared with the same period twelve months ago, the economy has grown by 6.7% of GDP, and 5.3% of GNP, the measure that strips out the effect of multinational companies.

The CSO also said that GDP had grown by 2.1% in the first three months of the year, up from its previous forecast of 1.4%.

Meanwhile, the Balance of Payments Current Account - a measure of Ireland's financial flows with the rest of the world - recorded a surplus of €2.7 billion in the second quarter, or 5.2% of GDP.

Today's Quarterly National Accounts show that personal consumption, the largest component of domestic demand, rose by 0.4% in the second quarter. Government expenditure decreased by 0.7% over the three month period.

Commenting on today's figures, the Minister for Finance noted that the increase in economic activity is broadly-based.

Michael Noonan said that unlike in the past when activity was excessively concentrated in the construction sector, we are now seeing both domestic-facing and exporting sectors performing strongly.

He also noted that exports were strong in the second quarter, growing by 13.6%.

"The multinational sector is contributing but so too are Irish-owned firms.  The competitiveness improvements we’ve seen in recent years are standing to us," the Minister stated.

"Today’s encouraging data is mirrored in strong employment growth as well as tax receipts to end-August which increased by almost 10% over the same period last year," he added. 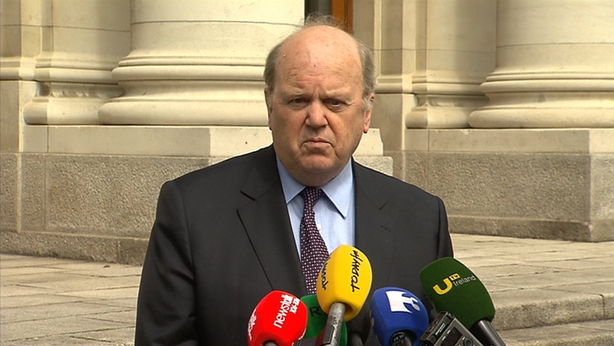 Mr Noonan also said that Ireland's debt to GDP ratio - a key measure of the country's financial position - will fall below 100% this year.

The Government debt ratio had peaked at 123% of GDP, but the combination of strong growth, quantitative easing and the weak euro has boosed the cash value of the country's economic output, improving the debt ratio at a much faster rate than expected.

Speaking after the publication of the CSO figures, the Finance Minister also said that the deficit target in next year's Budget will be below 2% of GDP.

The extremely strong growth numbers measured by the CSO are a continuation of a trend established last year, and have resulted in lots of extra tax revenue for the Government.

That has reduced the amount of money the Government needs to borrow to cover the gap between tax take and spending.

Mr Noonan said the deficit target in next month's Budget will be a number beginning with one - far below the EU deficit limit of 3%.

Commenting on today's figures, Davy economist Conall Mac Coille said that the Irish economy is likely to grow by more than 6% in 2015. The economist said that even if GDP is flat in the second half of the year, growth will equal 5.7%.

"These GDP growth rates are exceptionally strong. However, they are not inconsistent with the rapid growth of goods exports, industrial production, retail sales, employment and tax revenues through 2015," Mr Mac Coille said.

"The underlying picture is that the natural bounce back in the economy has been accentuated by the weak euro stimulating exports and low oil prices and tax cuts helping real incomes," he added.