Ryanair has said it will appeal today's final decision by the UK's competition watchdog ordering it to sell the bulk of its 29.8% stake in Aer Lingus.

Describing the decision as "ridiculous", Ryanair said it would appeal the order to the Competition Appeal Tribunal.

Earlier today, the Competition and Markets Authority said it was not good for competition when one airline could decide if a bid for its major competitor succeeded or failed.

In a statement, the CMA said the International Airlines Group bid for Aer Lingus was an important part of the decision to require Ryanair to reduce its shareholding.

In February, Ryanair had requested that the CMA re-examine its decision to require it to sell its near 30% stake in Aer Lingus down to 5%.

This followed a judgment from the UK Court of Appeal dismissing Ryanair's legal challenge to this decision.

Simon Polito, Chairman of the Ryanair/Aer Lingus inquiry group, said that IAG's bid for Aer Lingus was dependent on securing Ryanair's agreement to sell its shareholding.

"This recent development illustrates that Ryanair can decide whether a bid for its major competitor on UK/Irish routes succeeds or fails," he said.

Mr Polito said this concern was an important part of the CMA's decision to require Ryanair to reduce its shareholding.

"It's not good for competition when one company holds such an influence over the future of one of its major competitors," he stated.

"Although at this point Ryanair has yet to decide whether to sell its shares to IAG, we need to ensure that, whatever happens in relation to this particular transaction, Ryanair's ability to hold sway over Aer Lingus is removed," he added.

In a statement today, Ryanair spokesman Robin Kiely said that the CMA's decision was "factually unsustainable and legally flawed as the IAG offer for Aer Lingus proceeds".

Mr Kiely described the decision as manifestly wrong and one which flies in the face of the current IAG offer.

He also accused the Authority of basing its decision on bogus theories and invented evidence.

"When the only basis for the CMA’s original divestment ruling was that Ryanair’s minority shareholding was or would prevent other airlines making an offer for Aer Lingus, the recent offers by IAG for Aer Lingus totally disprove and undermine the bogus theories and invented evidence on which the CMA based its untenable divestment ruling," he said.

"IAG’s current offer for Aer Lingus proves that the the CMA’s invented theory of harm was hopelessly wrong, and is now unsustainable given that the circumstances have manifestly changed, and accordingly the divestment remedy must be revoked in light of this compelling evidence," the Ryanair spokesman added.

No Ryanair decision on IAG bid until after EU ruling

Ryanair is unlikely to make a decision on whether to sell its near 30% stake in Aer Lingus until after the European Union competition authority makes a ruling on the deal, chief executive Michael O'Leary told Reuters today. 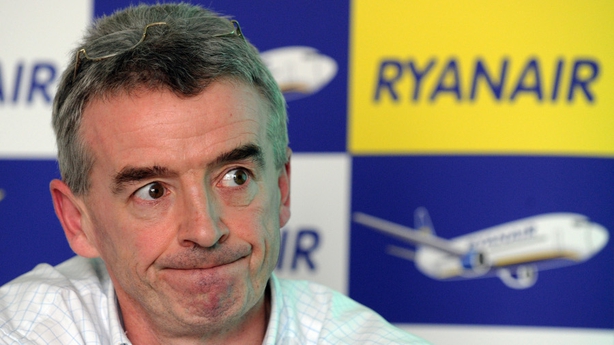 Mr O'Leary said he expected that IAG would submit its offer before the end of June.

But an EU competition probe could delay the decision by months.

"The EU approval I suspect would happen beforehand, because the IAG offer would be conditional on competition approval,"
Mr O'Leary told Reuters in an interview, when asked if he would wait for the EU before deciding on the sale.

"The offer would remain open until the EU had given competition approval," he added.

Mr O'Leary said he did not expect today's "final order" by Britain's competition and markets authority for Ryanair to sell most of its stake in Aer Lingus would impact on negotiations with IAG.

He said he thought legal action being planned by Ryanair "certainly rules out a forced divestment in the next 6-12 months."

He also refused to rule out a renegotiation of IAG's €2.55 per share offer price.

"There is always the potential that the price could change, but if the price changed it would change for all shareholders," he said.

IAG CEO Willie Walsh said in May that €2.55 was "the limit which we are prepared to offer" for Aer Lingus.