Greece defied its international creditors today by sticking to "red lines" on pension and labour market reforms and urging lenders to give ground.

This dimmed prospects of progress next week towards securing desperately needed financial aid.

Despite efforts by European Commission President Jean-Claude Juncker to coax Prime Minister Alexis Tsipras into moving on two key conditions for releasing EU/IMF bailout funds, the Greek government spokesman said lenders could not expect Athens to make all the concessions for a deal.

"There should not be an expectation on the part of institutions that the government will back down on everything," Gabriel Sakellaridis told a news conference.

"When you negotiate, there should be mutual concessions. We won't go beyond the limits of our red lines," he said.

"It's clear that we cannot cut pensions," he added.

Athens is running out of cash but has yet to reach a deal on reforms with its lenders, who have ruled out an agreement by next Monday's meeting of euro zone finance ministers.

Sakellaridis spelled out Greek hopes that the Eurogroup ministers will recognise progress towards an agreement in a joint statement, giving the ECB leeway to let Athens sell more short-term debt to Greek banks. brake, he said.

That would ease the immediate funding crunch, helping the government make a €750m payment to the International Monetary Fund on May 12 and pay wages and pensions later.

However, sources familiar with the deliberations said the ECB was highly unlikely to make such a move unless the euro zone ministers set out a very strong prospect of releasing the frozen bailout funds.

"We're nowhere near that as things stand today," said an official close to the negotiations between Greece and European Commission, ECB and IMF.

The ECB yesterday raised the amount of emergency liquidity assistance Greek banks can tap to counter deposit outflows and held off from tightening conditions for collateral they must present.

But without a political deal, the ECB could toughen its stance in the next two weeks, the sources said. 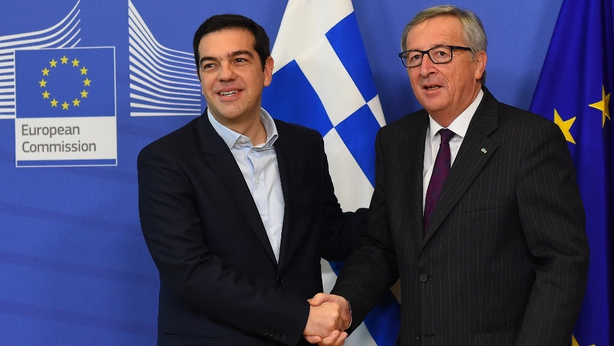 In frenetic diplomacy ahead of Monday's meeting, Juncker said he discussed Greece with ECB President Mario Draghi by telephone today and would be speaking to Tsipras again later in the day, just 24 hours after their previous call.

A Commission spokesman said the so-called Brussels Group negotiations would continue over the weekend.

French Finance Minister Michel Sapin, who has been trying to mediate between Athens and Germany, the EU's main paymaster, said he did not expect a deal on Monday but in the following days.

Tsipras was totally engaged in seeking a solution to keep Greece in the euro zone, he said.

Eurogroup chairman Jeroen Dijsselbloem held talks in Berlin to prepare for Monday's key session. In an interview with the French daily Le Monde, he said that while the final deadline for a deal was the end of June, "there could also be a deadline if liquidity problems become too important for Athens".

He ruled out any discussion of debt relief for Greece until the current bailout programme was successfully completed.

Athens has received €240 billion in two bailouts since 2010, but its economy has shrunk by 25%, poverty has soared and a quarter of its workforce are unemployed.

Greek Finance Minister Yanis Varoufakis, sidelined from the conduct of the negotiations, said in Brussels he expected a deal within days or weeks, which should include privatisations, reform of the pension system, the judiciary and value added tax.

He also suggested Greece needed a bad bank to deal with non-performing loans and unclog the banking system. To prevent future excessive borrowing, Athens could introduce a legal debt brake, he said.