US Federal Reserve Chair Janet Yellen has said that high equity valuations could pose potential dangers but that stability risks across the US financial system remained in check.

"I would highlight that equity market valuations at this point generally are quite high," Yellen said. "There are potential dangers there," she added.

Yellen's view on the run-up in stocks was an answer to questions from International Monetary Fund Managing Director Christine Lagarde, who joined the Fed chief for the opening session of the "Finance and Society" conference in Washington.

"We’ve also seen the compression of spreads on high-yield debt, which certainly looks like a reach for yield type of behaviour," Yellen said.

Another potential trouble spot that Yellen pointed out was low long-term interest rates, which could spike as the Fed normalises its policy, causing disruption across the financial system.

"When the Fed decides it’s time to begin raising rates, these term premiums could move up and we could see a sharp jump in long-term rates. So we’re trying to communicate as clearly about our monetary policy so we don’t take markets by surprise," she said.

Yellen tempered these remarks by saying that she did not see any bubbles forming at the moment, and she described risks to financial stability as "moderated, not elevated." 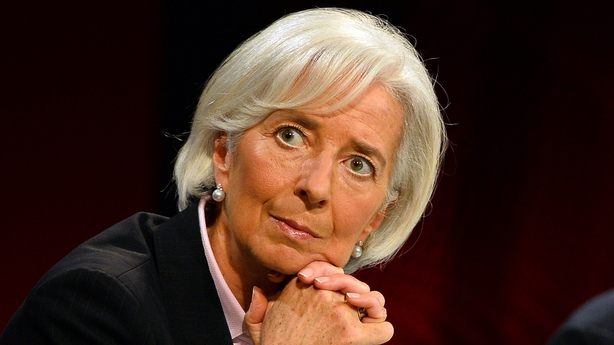 The question and answer session with Lagarde occurred after the two delivered similar speeches highlighting the need to continue reining in risk across the banking sector.

In her remarks, Yellen outlined the contributions of the banking system to society and the economy.

But she quickly turned her speech to the distorted system of incentives and weak controls throughout the financial industry that set the stage for the 2008 financial crisis.

"A combination of responses to distorted incentives by players throughout the financial system created an environment conducive to a crisis," Yellen said.

Lagarde also cast a critical eye on the behaviour of bankers and the need for change.

"What is needed is a culture that induces bankers to do the right thing even if nobody is watching,” Lagarde said in her prepared remarks.

Lagarde noted that more women leaders would help improve governance in the financial system, a comment that resonated in the event's crowd and waiting speakers, which featured some of the world's most powerful women in finance.

The IMF chief also said bank compensation incentives need to change so as to not reward excessive risk-taking.

Yellen said that regulators were too focused on individual firms before the crisis, and not focused enough on the safety of the entire financial system.

Policy makers, including the Fed, "remain watchful for areas in need of further action or in which the steps taken to date need to be adjusted," she said.