New figures from the Central Statistics Office show that the number of people signing on the Live Register in February fell by 4,300 to stand at 355,600 on a seasonally adjusted basis.

This is its lowest total since February 2009 and is down from 450,000, recorded shortly before Ireland entered its Troika bailout programme, which it exited a year ago.

It said that in unadjusted terms, a total of 355,124 people were signing on the Live Register in February, down 10.8% on the same month the previous year.

Today's figures also showed that the number of men signing on last month eased by 1.5% from January while the number of women was down by 0.8%.

The CSO said the number of long term claimants on the Live Register in February was 162,776. 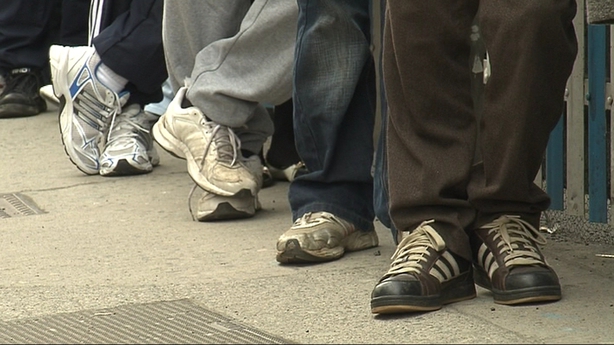 Commenting on today's figures, Davy economist Conall Mac Coille said they were just the latest data in a chain of economic releases for early 2015 suggesting that the Irish economy is still expanding at a rapid pace.

The economist pointed out that the Irish unemployment rate is now well below the 11.2% euro area aggregate.

He said that the improvements in the country's labour market are not surprising, adding that in contrast to volatile GDP growth figures, there has been a steady decline in the Irish unemployment rate since the middle of 2012.

Merrion economist Alan McQuaid said that while emigration has been a contributory factor in bringing down the numbers on the Live Register over the period, there is clear evidence that there is more to it than just that.

The economist said that employment conditions in the majority of sectors in the economy has generally improved in the past few months.

Mr McQuaid said that assuming the economy continues to grow strongly in 2015, as he expects, an average jobless rate of 9.7% is now envisaged for this year. He predicted that the figure is likely to hit the 9% level by December.

Meanwhile, ISME - the Irish Small and Medium Enterprises Association - warned that incessant calls by trade unions and labour ministers for wage increases were impeding job creation in the SME sector.

While welcoming the drop on the Live Register figures, ISME cautioned on the results of surveys from the likes of Ibec and PWC as they are only representative of big business and semi-states and do not show an inclusive picture of the whole economy.

"We are starting to see signs of possible growth in the still fragile domestic economy, however, the situation for SMEs remains precarious," ISME's chief executive Mark Fielding said.

"Our own figures indicate that the majority of SMEs will not be in a position to increase wages during 2015 and in a small percentage of cases further reductions will be necessary," he added.