HSBC's boss has rejected criticism about his receiving of bonuses through a Swiss bank account held by a Panamanian-registered company.

His comments came as the bank reported a 15% drop in annual net profits.

CEO Stuart Gulliver was forced to react to a report about his finances in The Guardian, which has led coverage of an international tax-dodging scandal at the bank's Swiss division.

"I pay full UK tax on my entire worldwide earnings," Mr Gulliver told reporters in a conference call, adding that the report about his account had not "in any way" impacted his leadership of the London-based bank.

He also admitted, however, that some of the practices of HSBC's Swiss private banking arm in the past had been "a source of shame and reputational damage" and said he considered them "very unacceptable".

The report on Mr Gulliver came after claims that HSBC helped clients from around the world dodge taxes on accounts containing €180bn, which are being investigated in several countries.

The scandal has tarnished the reputation of HSBC, which was quick to react to the latest allegations.

HSBC's chairman Douglas Flint said there was "absolutely nothing that Stuart has done that is other than transparent, legal and appropriate".

The bank explained in a statement emailed to AFP that Gulliver had opened his account in 1998 when he was working in Hong Kong and had put it in the name of a Panamanian company "for reasons of confidentiality".

It said Gulliver, who moved to Britain from Hong Kong in 2003, had "voluntarily declared his Swiss account to UK tax authorities for a number of years". 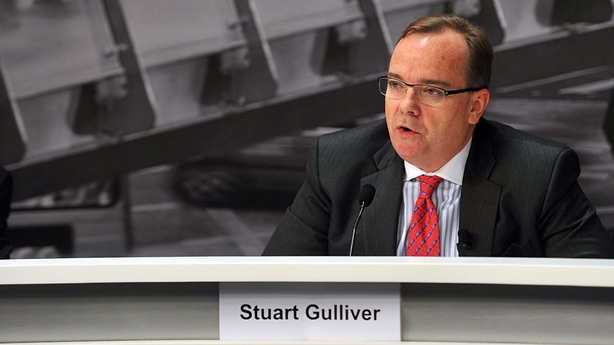 The bank also noted that Gulliver's overall compensation slid by 5% last year to £7.6m (€10.3m) after performance-related pay was cut by over a third.

The bank apologised again over the so-called "SwissLeaks" allegations, saying they served as a reminder "of how much there still is to do and how far society's expectations have changed in terms of banks' responsibilities."

HSBC also revealed on Monday that 2014 earnings plunged in a "challenging year" that was blighted by fines and compensation for mis-selling.

That compared with $18.7bn in 2013 when its performance was also boosted by disposals.

"2014 was a challenging year in which we continued to work hard to improve business performance while managing the impact of a higher operating cost base," Gulliver said in the earnings release.

"Profits disappointed, although a tough fourth quarter masked some of the progress made over the preceding three quarters," he added.

"Many of the challenging aspects of the fourth quarter results were common to the industry as a whole."