The European Central Bank got a lukewarm response from banks today in its fight to revitalize the sluggish euro zone economy, adding pressure on policymakers to start printing money next year to buy sovereign bonds.

Banks borrowed almost €130 billion of four-year loans from the ECB in its latest lending round, which is what traders had expected.

It brings the total take-up to just €212.4 billion, far short of the €400 billion upper limit identified for the end of the year.

The loans were considered one of the central bank's key planks in fighting an increasingly tough battle to stop the euro zone's economy from spiralling downwards and to stave off deflation.

Figures yesterday showed that France's core price inflation turned negative, its first drop since records started in 1990, underlining the gravity of the situation in the euro zone's second-largest economy.

The low interest from banks now means the ECB will likely have to print fresh money to buy state bonds if it is to keep a key pledge underpinning markets, namely that it will expand its balance sheet of assets such as bonds or credit to banks by €1 trillion. 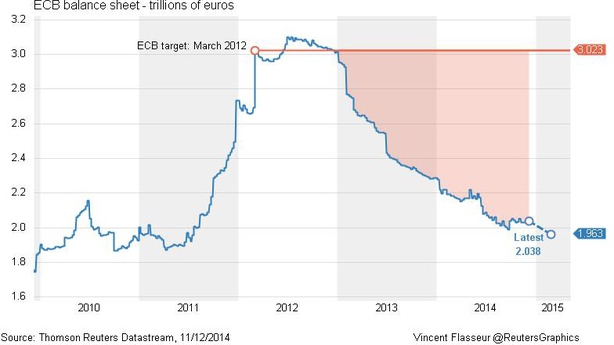 To compound matters on this front, banks are repaying earlier emergency loans given by the ECB at the height of the crisis, which means that the net impact of the fresh round of credit may be small.

Unlike previous similar offers, where banks simply parked much of the money with the ECB as a safety buffer, this time around, they would have to pay a penalty for so doing.

But finding opportunities to use the ECB money instead for lending is difficult, as the economy of the 18-country euro bloc all but grinds to a halt and business confidence slows.