Exchequer figures for November were €35m (0.6%) ahead of target according to the Department of Finance, with almost €6.2bn taken in by the State last month.

Income tax take was the main driver of this excess, with €70m (2.7%) more taken in during the month than had been forecast.

Stamp Duty and Capital Gains Tax were also substantially higher than anticipated, up €22m and €13m respectively on Budget 2014 expectations.

However VAT, Corporation Tax and Local Property Tax receipts were lower than forecast for the month. 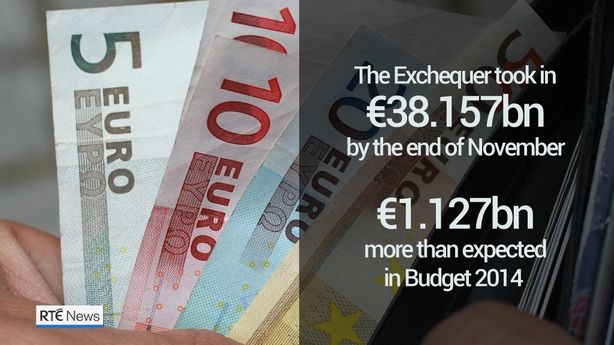 Income tax receipts – including the Universal Social Charge – were €122m (0.8%) ahead of forecast at €15.77bn. This figure includes tax returns made by self-employed workers last month.

The only tax categories that stood below Government forecasts by the end of November were Capital Acquisitions Tax, which is €26m (7.2%) behind at €335m and Local Property Tax take, which is down €26m (5.5%) at €449m.

This is blamed primarily on an overspend at the Department of Health, which was €580m (5.5%) ahead of profile by the end of the month.