The search for returns and investors' complacency about risk could threaten financial stability, the European Central Bank warned today in a report.

The report also singled out 'frothy' property prices as a potential problem for the euro zone.

"Such periods have the potential to breed systemic risks," it added.

"Property market developments in both the residential and commercial segments in some countries have been frothy, leaving property markets vulnerable to correction," the report continued.

It also said that the provision of bank credit remains weak, despite exceptional ECB support, given a combination of weak demand and credit terms in some pockets of the economy that may discourage borrowing and investment.

Addressing the challenges of sustaining high public debt, the ECB said that the work of restoring the soundness of public finances is unfinished.

Failure to make economic reforms and shield weaker members could damage the "essential cohesion" of the euro zone, the head of the European Central Bank said today, in a blunt warning to political leaders. 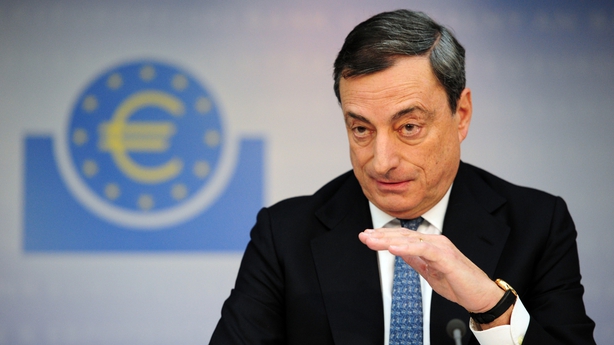 In unusually frank language, Mario Draghi urged countries across the euro zone to consider alternative ways to support struggling members, warning of the perils were fears to grow about those countries quitting the euro.

"Lack of structural reforms raises the spectre of permanent economic divergence between members," Draghi told an audience at the University of Helsinki.

"And insofar as this threatens the essential cohesion of the Union, this has potentially damaging consequences for all ... members," he added.

Draghi's remarks were not limited to economic reforms in individual countries but also to a wider rethink of some of the basic principles underlying the bloc, such as the mechanisms for countries to help each other.

The message comes less than a week after he pledged to take further steps if needed to shore up the euro zone's flagging economy and weeks ahead of a meeting of European leaders in Brussels to consider measures to bolster growth in the region.

Unlike the US, the euro zone does not have a system of 'fiscal transfers' by which richer members such as Germany can aid poorer states such as Greece.

"Countries need to invest more in other mechanisms to share the cost of shocks," Draghi said.

"Some form of cross-country risk-sharing is essential to help reduce adjustment costs for those countries and prevent recessions from leaving deep and permanent scars," the ECB chief said.

Draghi even broached the sensitive issue of creating what he called "some form of backstop for sovereign debt", a possible reference to joint guarantees for new debt.

Such ideas are strongly opposed by Germany, the euro zone's biggest and strongest member, whose politicians fear it could be left on the hook for reckless borrowing by other countries.