The number of people working in the State had increased to 1.9 million by the end of June, according to figures from the Central Statistics Office, the highest level of employment since 2009.

As a result, the total population has grown by 16,700 to stand at 4.6 million, according to the CSO.

Merrion's chief economist, Alan McQuaid, described the figures as positive, but pointed out that they weren't as strong as in recent quarters.

Emigration, he said, had been a contributory factor in bringing down the unemployment numbers but judging by the latest figures, there is more to the drop in unemployment than just that. 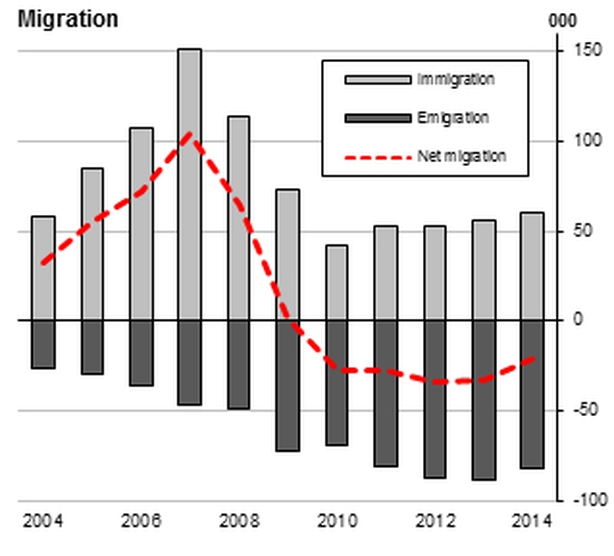 "Although the recovery path for the labour market won’t entirely be smooth, we do think that the numbers at work will rise and the level of unemployment will continue to fall over the rest of 2014," Alan McQuaid said.

"We are looking for a net increase in employment of around 36,000 this year. Furthermore, it does now appear as though the jobless rate has peaked, and we are looking for it to fall back to 11.4% on average this year from 13.1% in 2013, which itself was the lowest level since 2009," he added.

He concluded that there was a possibility that the unemployment rate could drop below 11% by the end of the year.

The association representing small and medium sized businesses, ISME, warned that jobs will not be created if business costs continue to increase and wage levels are being driven up by 'unrealistic demands.'

The association called for greater emphasis on cost controls in order to maintain competitiveness.

Dermot O'Leary, chief economist at Goodbody Stockbrokers described the recovery in the labour market as impressive and more broad-based than before.

However, he pointed to significant differences across generations and geographies.

"From a geographical perspective, the unemployment rate is lowest in Dublin, where it came in at 10%, but stands at over 14% in the South East of the country," he added.

Philip O'Sullivan, chief economist at Investec said the figures pointed to positive momentum in the labour market, but there was a persistent 'tail' of issues.

"While a rising population and decline in net outward migration have positive implications for some areas of the economy, we do note a number of troubling trends, such as persistent large outflows in the 15-44 age group while the profile of those migrating suggests that there are a number of skills mismatches in Ireland," he concluded.

Davy economist David McNamara said the figures provided further evidence that the labour market continued to improve in the second quarter, driven by the recovery in services and the construction sector.